Self-proclaimed socialist Rep. Alexandria Ocasio-Cortez appears to have united with the thugs. 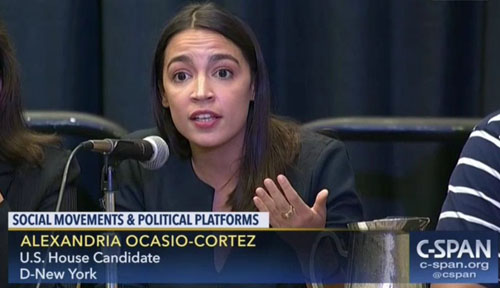 The New York Democrat in an Aug. 31 tweet promoted a fundraiser seeking bail money for several people, including Antifa members, who were arrested in a counter-protest of the “Straight Pride Parade” in Boston this past weekend, The Daily Caller reported.

“One way to support the local LGBTQ community impacted by Boston’s white supremacist parade? Contribute to the Bail Fund for the activists who put themselves on the line protecting the Boston community,” AOC tweeted.

Her post linked to a fundraiser that seeks to help counter-protesters from the “Straight Pride” event with “any legal fees, as well as supplies for jail support (rides home, food, changes of clothes, etc).”

Another member of the so-called “squad,” Rep. Ayanna Pressley of Massachusetts, tweeted: “Join me right now in making a contribution. TY to the allies & accomplices who stood in the gap & laid their bodies on the line today in affront #LGBT hate march. To everyone feeling unseen & vulnerable today…we got you. Equitable outrage. Our destinies & freedoms are tied.”

Journalist Andy Ngo, who earlier this summer was assaulted by Antifa thugs in Portland, tweeted: “Boston PD has released log of arrested individuals from Saturday’s antifa counter-protest against the Straight Pride. They face an array of charges including battery of officers & assault using a dangerous weapon. Congresswomen AOC & A. Pressley expressed support for protesters.”

One member of Antifa told the Herald, “We’re covered in black so when we attack these guys we can’t be prosecuted. They are fascists, 100%. How else are you going to get them to shut up?”

The “Straight Pride Parade” was planned by Super Happy Fun America, a group which “advocates on behalf of the straight community.”

Though Ocasio-Cortez refers to the protesters as “white supremacists,” Super Happy Fun America denied having connections to racism in a statement issued to The Daily Caller.

“Alexandria Ocasio-Cortez and Ayanna Pressley also shared a link to a bail fundraiser set up in advance of the parade, which gives people the impression that they condone illegal behavior. This is not a good example for elected officials to set, and contributes to dangers associated with free-speech and activism in general.

“The only connections to racism are in the deluded minds of protesters who all repeat the same mantra against those whom they disagree with: Racist, Fascist, Nazi, etc., are what detractors fall back on when their arguments are met with logical and rational push-back. They cannot win on an intellectual level, so they resort to name-calling. Those same people must have missed the Israeli flags and African-American supporters in our group.”