Report: Obama secretly transferred as much as $33 billion in cash and gold to Iran

The $400 million cash payment U.S. President Barack Obama sent to Iran earlier this year is just a drop in the bucket, a new report says.

Between 2014 and 2016, the Obama administration paid Iran as much as $33.6 billion in secret cash and gold, according to a Sept. 8 report by the Washington Free Beacon. 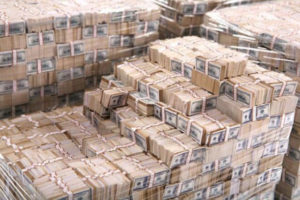 The report cited testimony provided before Congress by an expert on last summer’s nuclear agreement with Iran that said the Islamic Republic was paid $700 million per month from funds that had previously been frozen by U.S. sanctions.

In total, “Iran may have received as much as $33.6 billion in cash or in gold and other precious metals,” said Mark Dubowitz, executive director at the Foundation for Defense of Democracies.

“In July, the Associated Press cited U.S. officials who estimated that Iran ‘brought home less than $20 billion.’ Were these funds repatriated to Tehran in cash or in gold and precious metals? Through the formal financial system? Or through some combination?” Dubowitz asked the House Financial Services Committee.

The White House and State Department have acknowledged that some of the money paid to Iran will likely be used to fund terrorism.

Meanwhile, Sen. Marco Rubio said the Obama administration tried to “deceive” Congress and the American people about $1.7 billion in payments to Iran, suggesting at least some of the money was a “ransom” for American hostages. Rubio demanded the release of official documents for the related transactions.

“Each day brings new revelations about your administration’s efforts to deceive Congress and the American people regarding payments of billions of dollars to the world’s foremost state sponsor of terrorism,” Rubio wrote on Sept. 10 in a letter to Obama. “The America people do not believe the story that your administration did not provide Iran an illicit and potentially illegal ransom payment.”

On Sept. 8, White House officials told House Republicans that Iran wanted “immediate access” to the $1.7 billion paid by the United States in cash.

Rubio submitted a list of nine demands in the letter, including a request for a copy of a waiver allowing the use of cash, instead of complying with a U.S. code that states “all federal payments made by an agency shall be made by electronic transfer.”

Rubio also wants to know why the administration didn’t issue a check, which he says is the required method when a transfer is inappropriate, according to another U.S. code.

“Iran has pocketed this money and continued to hold and take more American hostages,” Rubio wrote. “It has likely used this foreign currency to fund its military including its ballistic missile programs and to support Iran’s terrorist proxies throughout the Middle East.”