Americans buying seafood in U.S. supermarkets “may inadvertently have subsidized the North Korean government as it builds its nuclear weapons program,” a report said.

The Kim Jong-Un government outsources tens of thousands of workers, many who work processing seafood for export, and “keeps anywhere from half to 70 percent of their pay,” The Associated Press (AP) reported on Oct. 5, citing scholars who have surveyed labor

ers. Some of the workers make as little as $90 per month – or roughly 46 cents per hour. 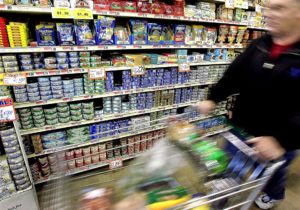 “The work can be exhausting, with shifts lasting up to 12 hours and most workers getting just one day off each week. At some factories, laborers work hunched over tables as North Korean political slogans are blasted from waist-high loudspeakers,” the report said.

The workers bring in hard cash for the Kim Jong-Un regime – estimated at anywhere from $200 million to $500 million a year. That could account for a sizable portion of North Korea’s nuclear weapons and missile programs, which South Korea’s government says have cost more than $1 billion.

Under a law signed by President Donald Trump in August, American companies are not allowed to import products made by North Korean workers anywhere in the world.

John Connelly, president of the National Fisheries Institute, the largest seafood trade association in the U.S., said his group was urging all of its companies to immediately re-examine their supply chains “to ensure that wages go to the workers, and are not siphoned off to support a dangerous dictator.”

“While we understand that hiring North Korean workers may be legal in China,” said Connelly, “we are deeply concerned that any seafood companies could be inadvertently propping up the despotic regime.”

Senate leaders last week said that the U.S. needs to keep products made by North Koreans out of the United States and get China to refuse to hire North Korean workers.

“The administration needs to ramp up the pressure on China to crack down on trade with North Korea across the board,” said top Senate Democrat Chuck Schumer.

The AP report also revealed that, along with the United States, products made by North Korean workers go to Canada, Germany and elsewhere in the European Union.