A Denver businessman said he has received death threats after exposing a Dominion Voting Systems employee who boasted about being able to rig the 2020 election against President Donald Trump, a report said.

In an interview with the Gateway Pundit’s Jim Hoft on Sunday, Denver businessman Joe Oltmann said he was able to infiltrate Antifa and during a Sept. 27 conversation with Antifa members discovered “Eric from Dominion”. 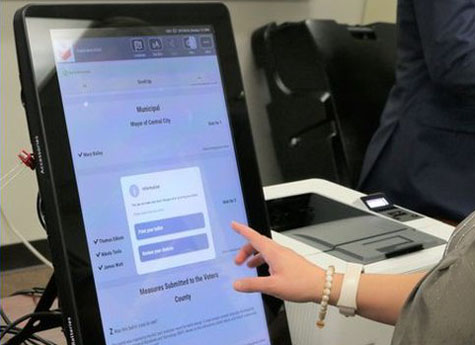 The U.S. headquarters for Dominion Voting Systems is in Denver.

Oltmann told the Gateway Pundit that “Eric” was telling Antifa members they needed to “keep up the pressure.” When one of the caller’s on a September group call asked, “Who’s Eric?” someone answered, “Eric, he’s the Dominion guy.”

As the conversation continued, Oltmann said someone asked: “What are we gonna do if F*cking Trump wins?” Oltmann paraphrased how Eric (the Dominion guy) responded, “Don’t worry about the election, Trump’s not gonna win. I made f*cking sure of that!”

Oltmann identified the “Dominion guy” as Eric Coomer. In 2010, Coomer joined Dominion as vice president of U.S. engineering, the report said. According to his biography, Coomer graduated from the University of California, Berkeley with a Ph.D. in Nuclear Physics.

Coomer was later promoted to voting systems officer of strategy and security at Dominion. He has since been removed from the Dominion page of directors.

Oltmann said he was banned from Twitter after exposing Coomer.

Oltmann also told the Gateway Pundit that Coomer’s profile is in fact being completely “scrubbed from the Internet.”