In some areas of China, Communist Party officials have reportedly gone door to door to vaccinate residents, threatening those who refuse with being blacklisted from certain segments of society.

The regime of supreme leader Xi Jinping has ordered a propaganda campaign in which TV anchors endorse vaccination slogans, urging people to “lend an arm.” 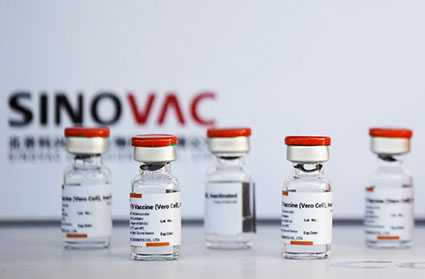 Meanwhile, hundreds of Chinese Communist Party (CCP) officials are refusing to “lend an arm,” fearing adverse reactions to the homegrown vaccines, The Epoch Times noted in an April 5 report.

Internal documents obtained by The Epoch Times show the CCP officials giving such reasons for avoiding the vaccine as allergies, underlying illness, pregnancy, recent surgery, or a cold.

In the town of Xintai, the report said, “only three out of 66 officials have gotten vaccinated, with another two on the registration list — showing a dismal willingness rate of less than 10 percent.”

In Tai’an County, which has jurisdiction over the town, only four officials in the 56-member Housing and Urban-Rural Development Bureau took the vaccine.

“In the county’s political and legal affairs committee, a well-funded CCP organ that has direct oversight over the court system, one person mentioned toothache,” the report noted. “In Tai’an’s fiscal service center, some said they’re taking Chinese medicine or have unspecified illnesses.”

“The low participation rate from the officials, who have been tasked with ‘leading by example’ in China’s latest vaccination drive, appears to signal a greater lack of enthusiasm within the country,” the report said.

Little is known about the homegrown vaccines rushed out by the Xi regime as clinical data has been kept from the public. The World Health Organization (WHO) on March 31 vouched for efficacy levels being above 50 percent — the minimum bar for a vaccine’s public use.

“We know nothing about this vaccine,” a China resident surnamed Li told the Chinese-language NTD, an affiliate of The Epoch Times. “There’s no third stage trial data nor analysis on whether it can produce antibodies at all, whether we can still get infected or infect others. We know nothing.

“We are better off simply having a few bowls of chicken soup at home to boost our immunity, don’t you think?”

The son of a government official in Wuhan, ground zero of the covid pandemic, said they consider the vaccine unnecessary, citing a history of issues with past Chinese vaccines.

“The Chinese Communist Party seems pretty anxious about people’s lack of interest in getting the vaccines,” the Wuhan resident said in a recent interview. “A lot of people seemingly support the Party and hate America during normal times, but if you were to ask them to take domestic vaccines no one would agree.”

“A lot of common people are worried about this, and so am I,” he told The Epoch Times in a recent interview.