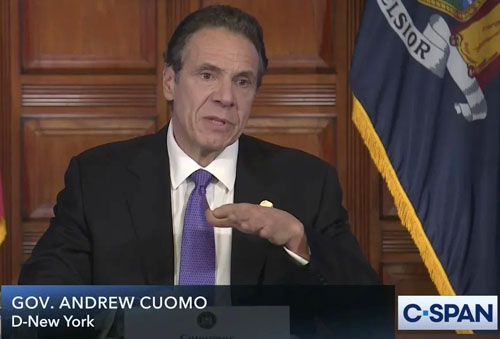 Cuomo’s re-election campaign in 2018 received $1 million in donations from the Greater New York Hospital Association. The association and the health-care workers union, 1199 SEIU, also spent $5.9 million lobbying in Albany in 2018.

“A few days before the 2018 election, Cuomo approved a multibillion-dollar Medicaid rate hike for hospitals and nursing homes, which the association had lobbied for, and which allowed them to settle a pay dispute with the union,” Devine noted.

Northwell Health received $10 million in state payments in 2019, according to OpenTheBooks.com.

When the coronavirus pandemic hit in March, “the association successfully lobbied the Cuomo administration to transfer covid-positive patients to nursing homes to relieve pressure on hospitals,” Devine wrote.

Despite warnings from doctors that the move represented “a clear and present danger” to other nursing home residents, Cuomo issued his directive March 25, while federally provided beds in the Javits Center and USNS Comfort hospital ship mainly lay empty.

“As we now know, the directive was a death sentence for an estimated 15,000 nursing home residents,” Devine noted.

“With the move proving to be a legal and public-relations nightmare, the association again struck gold when it lobbied for a budget provision limiting the ability of COVID-19 victims to file malpractice suits against hospitals and nursing homes,” Devine continued. “Well satisfied with its investment in the governor, the association then spent millions on TV advertising that praised Cuomo’s management of the pandemic.”

Cuomo has received $6.2 million since 2014 from 347 companies who then made $7 billion from state contracts, the OpenTheBooks audit found.

Overall, the audit shows a “systematic pay-to-play culture in Albany,” says Adam Andrzejewski, CEO of OpenTheBooks.com, a nonprofit which has compiled a comprehensive database of U.S. public sector expenditures.