None of the charges made in ex-British spy Christopher Steele’s so-called Trump dossier have been confirmed.

Yet, BuzzFeed published the dossier and the FBI used it as a springboard to launch the investigation into alleged collusion between the Trump campaign and Russia. And neither have been able to verify the dossier’s claims, a report said. 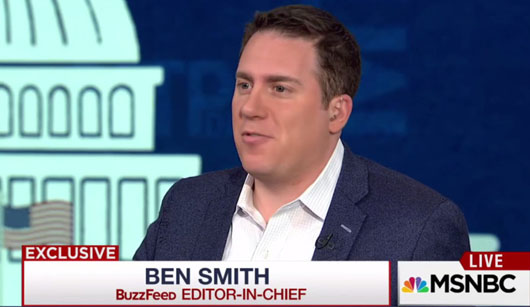 “The first face-to-face encounter” between BuzzFeed editor Ben Smith and one the dossier’s targets, Russian entrepreneur Aleksej Gubarev, “was set to happen last month in a New York City law office,” Rowan Scarborough noted in a July 11 report for The Washington Times.

In a December 2016 memo, Steele had accused Gubarev “of a charge that even the former spy later admitted in court he didn’t confirm: that Gubarev, the creator of Webzilla Inc., a computer server supplier, had bombarded Democratic Party computers with pornography and spyware,” the report said.

Gubarev would go on to file libel lawsuits against BuzzFeed in Florida and against Steele in London.

“The planned Gubarev-Smith tete-a-tete on June 27 was U.S. District Judge Ursula Ungaro’s attempt to see whether the two sides could settle through a mediator,” Scarborough wrote. “Smith never showed up.”

The FBI “not only used the Democratic Party-funded dossier, but it also embraced it,” Scarborough wrote. “The bureau cited the accusations to a judge to win a year’s worth of wiretaps against Trump campaign volunteer Carter Page. The surveillance began in October 2016, months before BuzzFeed posted the document.”

Yet, none of the charges in the dossier, to date, have been confirmed.

A BuzzFeed spokesperson told The Washington Times that Smith’s attendance was not required.

Gubarev’s attorney, Val Gurvits, disagreed, saying that the editor of the political and social news website had violated the judge’s order.

Judge Ungaro’s mediation order seemed clear: “The appearance of counsel and each party is mandatory.”

Gurvits told the Times that Smith “should have been there as per the court order. Can’t comment beyond that.”

The Gubarev lawsuit now is headed for trial in Florida in November – unless Judge Ungaro dismisses the case based on a legal doctrine known as “fair reporting privilege,” the report said.

Of his decision to post the dossier, Smith has said, “I’m proud we published.”

BuzzFeed has hired a consulting firm, “complete with a former FBI cybersleuth, to try to confirm Steele’s claims,” Scarborough noted.

Steele has said in a court filing in London that he did not confirm unsolicited Gubarev reports. but simply added them to his final memo of December 2016 and left it to others to confirm.

Gurvits has said that any BuzzFeed investigation will turn up no evidence because Gubarev played no role in Russian computer hacking.

Under a British judge’s order, Steele underwent a deposition in London last month by a host of attorneys. His answers remain confidential.