In order to take back the Republican Party from the RINOs, and then the American ballot box from the Left, MAGA and America First supporters are starting at the local precinct level.

Dan Schultz, who runs a website called The Precinct Project, said Precinct Committeemen are the “foot soldiers in the army” who can change the chemistry of the Republican Party as it now stands.

It is at the precinct level where the party should be its strongest, Schultz said, but it is also tragically where it is the weakest. 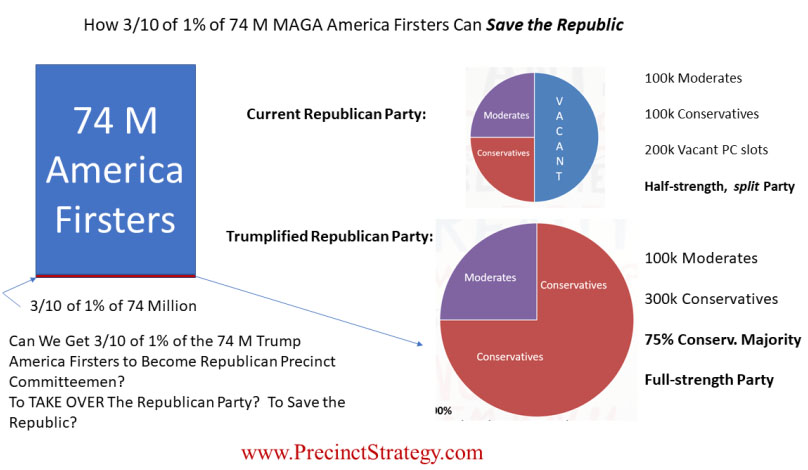 Schultz, who ran for and won his local election for precinct committeeman in Arizona, is showing others how they can do the same.

After hearing Schultz’s strategy on Bannon’s program, Daniel Wiley, who described himself as just a regular guy in Georgia who is not even particularly politically motivated, said he decided to run for chairman of the Douglas County GOP.

A strong supporter of Donald J. Trump, Wiley won in a landslide.

After Wiley’s victory, reports say that all of the RINO board members that were left refused to serve under a Trump supporter and quit in protest.

“So Daniel just replaced the ENTIRE Douglas County GOP board with all MAGA, in one fell swoop,” Gateway Pundit’s Joe Hoft noted.

Schultz noted that the November 2020 election left many in the Trump movement feeling powerless to change things sufficiently to elect the people who represent their needs.

Schultz says that feeling powerless is exactly what the Republican National Committee (RNC) wants voters to feel, adding that those who run the RNC have made it their job to hide the ways everyday Americans can effect change with relatively minimal commitment and time.

Referencing the barrage of emails and junk-mail the RNC sends out, Schultz says, “The RNC really wants your money, but they do not want you to know where the real power lies.”

That power begins at the precinct level, Schultz said, and represents local activism at its best.

Becoming a precinct committeeman is one of the most effective ways to quickly change the party’s direction, Schultz says.

Using the strategy of filling precinct committeeman spots with solid conservatives, Schultz said, in the 2012 election, he was able to “[invest] a couple of hours a month and three or four at the time of the primary and general elections…in [his] precinct, with [his] conservative cohorts, to double Republican turnout in a local mayoral race, as compared to the city-wide average turnout for all voters, and achieve an 86+ percent Republican turnout.”

Schultz said that Trump supporters need to make sure the 200,000 vacant precinct committeeman spots are occupied by solid conservatives who respect and follow the Constitution.

Schultz says that if “three-tenths of one percent (200,000) of Trump voters filled those spots, they could take over the party. We would guarantee better people getting elected in the 2022 primaries and general election, and by 2024 we would reclaim the House, the Senate, and Presidency votes are being counted properly.”