The film “Mr. Jones” examines the atrocities committed by Joseph Stalin and the Soviet Union and the New York Times reporter, Walter Duranty, who enabled them.

The film, directed by Agnieszka Holland and featuring Peter Sarsgaard as Duranty, focuses on the Ukrainian Famine, or Holodomor, a Soviet-enforced mass starvation of Ukraine’s peasants in which at least four million people died. 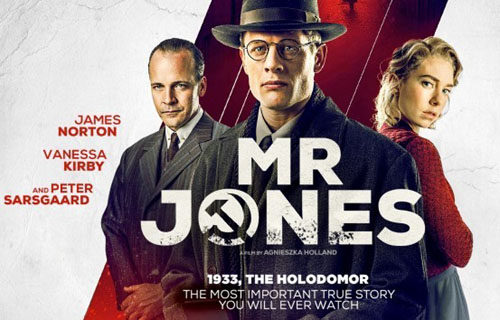 In his reporting for the New York Times, the Pulitzer Prize winner Duranty dismissed rumors of the Ukrainian Famine, then downplayed them.

“The brilliant film … will help ensure that neither the evil of the Marxist regime nor its victims in that vast graveyard will be forgotten,” James Freeman noted for the Wall Street Journal on July 27.

The film’s title character is Gareth Jones, a young Welsh journalist in the 1930s who risked everything to tell the truth about communist mass murder. In the film, Jones is portrayed by James Norton.

It was Duranty who, in brushing off Jones’s account of the atrocities, blithely explained to Times readers, “You can’t make an omelet without breaking eggs” — one of the most shameful phrases in the history of the newspaper. The eggs were human beings.

“I was thinking for quite a long time, since the end of the Iron Curtain, that very quickly we forgot and forgive the communist crimes. And some crimes against humanity are unbearable,” the Oscar nominee, 71, told the Daily News.

Noting that much of the world “is not really familiar” with the film’s events, Holland added that even the true death toll is unknown.

“No one speaks about it. No one knows about it,” she said. “So I thought that somehow it is a duty to put a light on that.”

The genius move of this scathing and suspenseful film by Poland’s Agnieszka Holland (who was once arrested by the Soviets, during the Prague Spring) is in whom it selects to be the menacing, dead-eyed apparatchik with a cold determination to search out and destroy any threats to the regime: He is none other than Walter Duranty, the New York Times’s man in Moscow, or rather Moscow’s man at the New York Times. Duranty is portrayed by one of the screen’s true masters of all things snaky and slimy, Peter Sarsgaard. Sarsgaard, Holland, and screenwriter Andrea Chalupa perform such a vicious act of celluloid vivisection on Duranty that Mr. Jones may restore your faith in movies.

Writing in a First Things analysis titled “Liars Go To Hell”, Francis X. Maier noted that Duranty “claimed that Ukraine’s ‘food shortages’ were the result of local mismanagement and the work of ‘wreckers’ and ‘spoilers’ intent on undermining Soviet progress. He repeatedly denied the mass starvation in his reporting. But he did suggest that ‘you can’t make an omelet without breaking eggs’ . . . especially when the omelet is the task of modernization, and the cooks are tough-minded Bolsheviks intent on a better tomorrow.”

Maier writes of the film: “The words ‘must see’ are grotesquely overused in movie reviews, but in this case, they are apt. At a time when lying, bullying, and violence seem to be making a comeback in the vestments of progress, equality, and justice” the film “is a useful lesson in consequences. It’s an opportunity to watch and learn.”

“Mr. Jones” is currently available on Amazon and other platforms.