Question: Who’s the real target of the revived Epstein investigation? 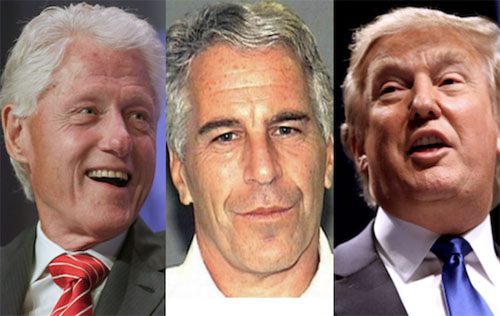 This month, we introduce a new daily feature: ‘Question of the Day’. Let’s have some fun! Send your responses here [world@worldtribune.com] or comment on Facebook and we’ll publish the best.

Question of the Day, July 12, 2019: The Jeffrey Epstein scandal fits the narrative about President Donald Trump that the Democrat Party and the Mainstream Media have been propagating since the height of the 2016 campaign. The facts of the story, however, point to a powerful correlation between Epstein and top Democrats including former President Bill Clinton. As the Russia collusion excitement fades, will the U.S. Attorney’s Office in the Southern District of New York be targeting Epstein’s co-predators who victimized young girls or will the real target be the Republican president of the United States?

From U.S.  women soccer stars to journalists pushing narratives on pedophile scandals, politics is in the air. A British judge even threw the book at a journalist who tried to provide courtroom coverage of a Muslim gang accused of grooming underage girls for sex. To do so, he apparently was guilty of violating political sensitivities. The one thing that unites all these protagonists is a passion for political correctness. Are these people suffering from addiction? More to the point, is politics the most important aspect of your daily life? If not, what it?

NO .. The average American thinks that “politics” is like a sport. It’s NOT. The Progressives/Socialists/Democrats play this 24/7-365 .. While you are off having a life, they are working diligently to steal your money, ruin your children and destroy your society. – Richard Seaton

What has become way to important in our daily lives is the opinions of cable news networks and all the fake news! – Melanie Rice

Politics is important if you care about the nation’s future. MEGAN RAPINOE HAS BECOME “WAY”–“TOO”–“IMPORTANT”—“IN”–“HER”–“OWN”–“EYES”.!!! – Michael E. McDaniel

The real question is “has Hate become way too important in the Democrat Party?” – Mae Ferrell

No. We are in a fight to save America from Socialism. We need to stay vigilant – Cynthia Bourgeois

There is no U.S. Women’s Soccer Team currently. There is a group currently posing as one and who taken advantage of the name. – Michael Wilkins

We are in real trouble if we don’t take our schools back. – Katie Knack

Only Kelley O’Hara should be invited. – Carol McCarthy

OK she got 15 minutes of fame. What’s her name again !!!! – Rhudi Elizabeth Eagle

Guess what… You haven’t been asked.. Get over yourself. – Shaun Clark

Stay out of OUR White House !!! – Terry Ford

I will no longer watch girls soccer. – Steve Woods

Did anyone ask ya’ll to go to the WH? Because…I’m prett-y sure no one asked ya’ll to go. – Staci Tapia

Stop giving her any attention! Don’t even share posts! She wants to be another CK! Don’t give her one second? – Helen Larson

Question of the Day. WorldTribune.com, Question: Who’s the real target of the revived Epstein investigation?