A 10-year-old North Carolina student was punished after what his parents said was a respectful gesture toward his teacher – he referred to her as “ma’am.” 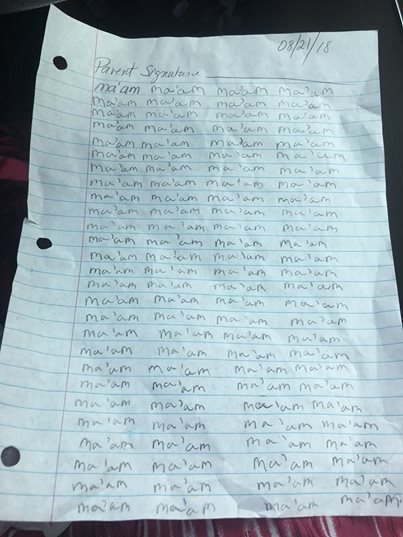 Parents Teretha Wilson and McArthur Bryant said their 10-year-old son, Tamarion, was punished by his fifth-grade teacher at North East Carolina Preparatory School in Tarboro for using the term.

The teacher said Tamarion called her “ma’am” after being told not to do so and she then had him write the word on a sheet of paper numerous times as punishment, according to a report by WTVD.

Tamarion told his mother the teacher asked him to return the paper with a parent’s signature, the report said.

A family member shared a picture of the paper along with a statement from Wilson on Facebook that concluded with the mother saying “With everything going on in the world when did it become an issue for a child to respect their elders.”

Wilson said the teacher also told Tamarion that “if she had something, she would have thrown it at him.”

After Wilson signed the paper, she had Tamarion write down the definition of “ma’am” (“a term of respectful or polite address used for a woman,” according to Oxford Dictionaries) and hand that in as well.

Wilson said she met with the teacher and the school’s principal and she requested that her son be moved to a different classroom. The principal agreed.