Project Veritas: ‘Every single one of these transnational criminal organizations are involved in sex trafficking’

Criminal organizations are exploiting the Biden administration’s “reasonable fear” immigration policy to easily get away with child sex-trafficking and other heinous crimes, a Department of Homeland Security (DHS) whistleblower told Project Veritas. 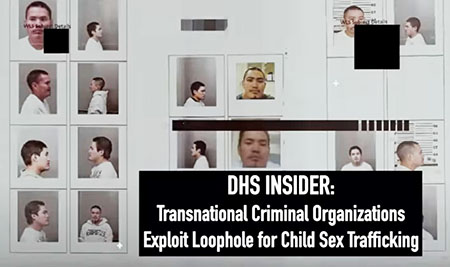 “Once [a migrant gang member] makes the declaration of, ‘My life is in danger and I may be harmed if I return home,’ they’re taken off the [Transnational Organized Crime] watchlist,” the DHS insider told Project Veritas founder James O’Keefe. “That makes it a giant loophole,” they said.

“Some of these [migrant gang members] are encountered by Border Patrol and they’re asked right away, ‘Do you fear for your life if you are deported?’ They’ll say no, and then the next day they’ll say yes,” the whistleblower said. “It’s almost like they are coached, ‘Hey if you get caught, just go ahead and say this.’ ”

The DHS insider believes the ongoing situation at the U.S. southern border is more severe than most Americans know it to be.

“This to me is a bigger problem than terrorism is right now within the country…Every single one of these Transnational Criminal Organizations are involved in sex trafficking,” the whistleblower said. “Children are the most vulnerable population of any society. So, when you’re sending kids to a place with no family [accompanying them] – or when the only family or guardians [they have] are known gang members, they’re even more vulnerable.”

O’Keefe asked why the insider decided to speak to Project Veritas instead of corporate media outlets.

“If I was to go to any other media organization, like The Washington Post or CNN — they’re just mouthpieces for the administration…they won’t report the information,” the insider said.

immigration, Project Veritas: ‘Every single one of these transnational criminal organizations are involved in sex trafficking’, Team Biden, WorldTribune.com

Project Veritas: ‘Every single one of these transnational criminal organizations are involved in sex trafficking’ added by World Tribune on August 27, 2021
View all posts by World Tribune →