‘Presidential’ Trump in Ohio sums up 5 months of Team Biden: ‘A complete and total catastrophe’

A “presidential” Donald J Trump rallied conservatives to “Save America” while holding Democrats’ feet to the fire during a massive rally Saturday in Wellington, Ohio. 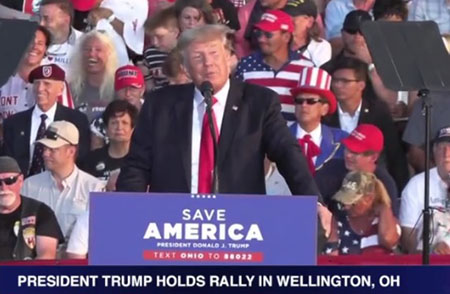 Trump kicked off the rally by stating the obvious: “After just five months, the Biden administration is already a complete and total catastrophe.”

Trump described the current state of misery inflicted by Team Biden: “Critical race theory is being forced on our military. Gas prices are spiking. Inflation is skyrocketing and China, Russia and Iran are humiliating our country. Joe Biden is destroying our nation right before our very own eyes.”

He also provided a hint as to his 2024 plans: “We won the election a second time and it’s possible we’ll have to win it a third time,” Trump said followed by applause and chants of “USA! USA!”

Trump also pointed to what he refers to as the “fake news media,” and asked: “Do you miss me?”

Trump is scheduled to hold another rally in Sarasota, Florida, on July 3.

Prior to Trump’s arrival, attorney Lin Wood posted on Telegram: “Quite a motorcade for President Trump’s arrival at his speech tonight in Ohio. Wow! One could say it looked very Presidential!!!”

Ohio Republican Rep. Jim Jordan noted prior to Trump’s speech that “we all want Trump to run in 2024.”

(View the entire Trump rally below)