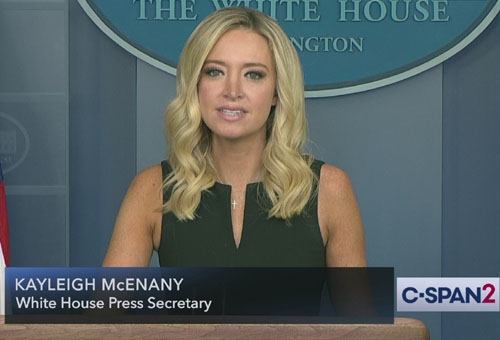 Georgia GOP Chair David Shafer wrote that the move was due to a lawsuit in Georgia filed by Trump’s team. “Had we not met today and cast our votes, the president’s pending election contest would have been effectively mooted. Our action today preserves his rights under Georgia law,” he said in a statement. A similar statement was issued by the Pennsylvania GOP on Monday.

McEnany on Tuesday also dismissed a reporter’s question asking whether Trump is trying to de-legitimize millions of votes.

McEnany noted the real “assault on Democracy” is how Trump faced years-long pressure and accusations from corporate media outlets and Democrat politicians claiming that he colluded with Russia, which ultimately resulted in then-special counsel Robert Mueller’s report saying he found no evidence of collusion in the 2016 election.

In the Sunday broadcast of Fox News’s “Life, Liberty & Levin”, host Mark Levin warned his audience that shrinking from debates regarding Trump‘s election lawsuits is not an option since everything the Founding Fathers fought for is at stake.

“It’s a very serious situation that we’re in today,” Levin said. “Look at this election. You have people saying, ‘they don’t have any legal cases.’ You have courts ducking left and right. The Democrats went into these states with a plan. The plan was to destroy the safety and security measures in virtually every state, but particularly the battleground states. What they did in Pennsylvania is a disgrace. … They eliminated signature requirements, postal date requirements, extended voting periods. In other words, those safeguards that were in place in Pennsylvania for decades were removed. Now, why would the Democrats want to remove them? To institutionalize corruption and fraud.”

Levin warned against throwing in the towel to those who seek to dismantle the nation from within.

“You can go through the various states and you can see the Democrat Party, the Biden campaign and their lawyers, state by state, went into these areas for the purpose not of strengthening the vote, strengthening safety to ensure the people who are voting should be voting, but the opposite,” Levin said. “Now, why would a political party do that? Why would a political party want to eliminate the safeguards to the franchise? The reason is to institutionalize fraud.”

Levin added: “That’s why litigation is taking place. That’s why people are trying to figure out what happened here. And that’s why people like me are not just going to give up and roll over for the rest of time when they turn the whole country into California where Republicans can’t win anything statewide. … [Democrats] intend to fundamentally alter our constitutional system by destroying our judiciary, destroying the Senate, destroying the legislative process with the filibuster rule, and once and for all destroying our voting system. … [There’s] so much power-hungry, ends-justify-the-means activity going on that it is frightening.”

You’ve heard of the Iron Triangle, but we have more now of sort of an Iron Box. We have Big Tech, Big Media, the Democrat Party and the entrenched bureaucracy. And they all work together and they all feed off each other and they all empower each other. Then you have “we the people.” In this case we had a representative for “we the people” called Donald Trump, President of the United States. And that Iron Box has done everything it can to destroy him and his administration and to handicap him and think about all the successes he has had, even with all of that. And now we have the Democrat Party in Big Media and Big Tech that did many things during the course of this election which they hope would ensure Biden’s victory. Changing rules in violation of state constitutions, changing rules in violation of the federal constitution, and all the rules are changed to do what? To allow fraud and to institutionalize fraud. They’re not good government changes. No signatures, no matching signatures, no postal dates and so forth. What’s that all about? That’s about corruption. That’s about empowering the Democrat Party, the way they took over California, Ronald Reagan’s home state. And in our own country, the Chinese have penetrated virtually all aspects of our culture and government — Hollywood, the NBA, Wall Street, colleges and universities, Capitol Hill, so many corporations. And now a man who demands to be president of the United States through all this corruption, all this thievery. Joe Biden. The wrong man at the wrong time. And this country is in trouble. And the media is a major reason why we are in trouble.

More than 1,700 voters were singled out for illegally casting two ballots in the 2020 election, including the presidential race.

As of now, none of those fraudulent votes were thrown out, according to state election officials.

“And so far, none of the cheaters has been prosecuted, raising concerns about continued fraud as Georgia prepares to vote again in twin U.S. Senate runoff elections next month,” Paul Sperry reported for RealClearInvestigations on Dec. 13.

The majority of double voters were Democrats who cast an absentee ballot either by mail or drop box and also voted in person on Election Day, officials said. That is a felony under state law.

The highest share of offenders were from Fulton County, which includes Atlanta.

State Rep. Mark Finchem announced that subpoenas have been issued for a forensic audit of ballot counting machines in Maricopa County.

State Rep. Eddie Farnsworth said he would issue subpoenas requiring the machines — and the software that powers them — be audited. The subpoenas will “ensure that at least the legislature has a process in place” to vet the “veracity” of the 2020 election, he said.

The Trump campaign on Monday filed a lawsuit in New Mexico challenging the 2020 general election results over the state’s use of ballot drop boxes.

The campaign’s lawsuit alleges that New Mexico Secretary of State Maggie Toulouse Oliver violated state election laws by allowing voters to return their absentee ballots in drop boxes placed outside polling locations instead of handing their ballot to a presiding election judge, The Epoch Times reported.

The drop boxes were installed in the state as part of measures to avoid crowding at polling places due to the pandemic. The lawsuit argues that the drop boxes should have been subjected to the same requirement as a “secured container,” as stipulated for alternative ballot-return options by the election code.

The campaign sued, asking the court to delay the certification of New Mexico’s election results or alternatively ask the court to order the New Mexico legislature to appoint the electors. The legal team is also asking the judge to mandate a statewide canvass of absentee votes and is seeking the court to segregate the ballots turned in at drop boxes, investigate each location to determine whether statutory procedures were followed, and if they were not, to exclude them from the vote count.