Twitter and Facebook were shut down in Uganda on Tuesday after the country’s longtime leader accused social media of taking sides ahead of the presidential election on Thursday.

“If you want to take sides against the (ruling party), then that group will not operate in Uganda,” Museveni said in a national address. “We cannot tolerate this arrogance of anybody coming to decide for us who is good and who is bad.”

Museveni, who has ruled Uganda since 1986, is facing a challenge from pop singer and opposition lawmaker Bobi Wine.

The Government of Uganda said in a statement: “The President warns that if the social media channels like @Facebook and @Twitter are not being friendly and equitable to some of the Ugandans, then there is no reason as to why we should have them operate here.”

While Facebook didn’t immediately respond to the Uganda leader’s decision to shut down social media ahead of the election, Twitter was furious.

“We strongly condemn Internet shutdowns – they are hugely harmful, violate basic human rights and the principles of the #OpenInternet,” Twitter said in a statement.

Which led many social media users to respond — Say What?

During the 2020 U.S. presidential campaign Twitter blocked from its platform The New York Post and any mention of its reporting on Biden family corruption. The Post’s story was not debunked, it was not a conspiracy theory, it was not Russian disinformation. It was a major story relevant to the presidential election, yet Twitter did exactly what it is accusing Uganda’s president of doing.

Those who support Twitter’s blocking the New York Post, and its permanent suspension of President Donald Trump’s account, like to claim that since it is a private company Twitter gets to set its own rules. “Their platform, their rules,” one tweet said.

To which one social media user responded with this: 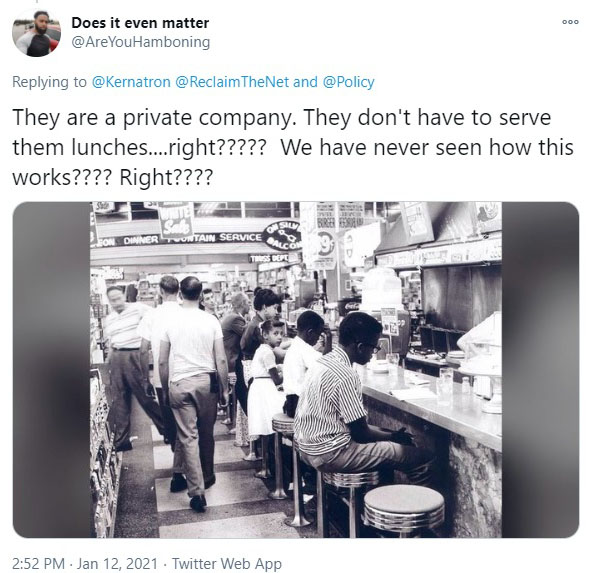