Get used to it. President Donald Trump.

It is a phrase that polite society in Washington, D.C. and in the most sophisticated world capitals could not conceive of, much less utter as even a hypothetical. Which is why he won his party’s nomination and the general election decisively against overwhelming odds. 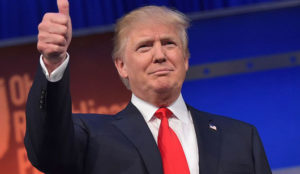 And now, according to our sources, the pace of his revolution will pick up. Because Donald Trump and his brain trust know exactly what it is up against in Washington.

When Ronald Reagan similarly won in a landslide in 1980, a retired Air Force general who later played a pivotal role in the development of the Strategic Defense Initiative, told a reporter how John F. Kennedy had succeeded in executing a permanent transformation of the un-elected bureaucracy that still runs Washington.

Reagan tried but failed to counter that media-administrative power matrix in the nation’s capital. President Donald Trump is determined to accomplish the goal (“drain the swamp”) which is key to implementing his campaign slogan: “Make America great again.”

It will take a revolution, but Trump has proved that such can be accomplished without violence. All that is required is the willingness to say no to tyranny and yes to the God-given potential of each and every American.

Related: The elites’s problem with Donald Trump: He’s not for sale, July 1, 2015