Pastor James E. Ward’s pre-election “40 Days of Humility, Prayer, and Fasting” will culminate on Nov. 2 with a national prayer event live-streamed from the Museum of the Bible in Washington D.C. 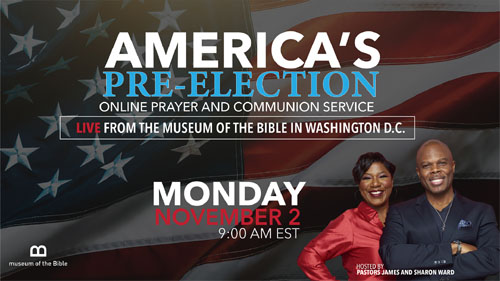 The timing of the fast falls precisely between the end of the most violent summer of rioting in over 50 years and right before what many Americans believe is one of the most important elections in the nation’s history.

The event’s organizers said it seeks to “promote enduring healing and racial harmony in our nation.”

Pastor Ward and his wife Sharon spontaneously emerged in the national spotlight following the shooting of Jacob Blake, Jr. in Kenosha, Wisconsin. Julia Jackson is Blake’s mother and a longtime member of Ward’s congregation, Insight Church, in Skokie, Illinois. When her son was shot resisting arrest, Jackson asked Ward to accompany her when she addressed the press on Aug. 5.

In the weeks following, James Ward appeared in multiple news interviews on CNN and other outlets. He and Sharon Ward participated in a panel discussion with President Donald Trump in Kenosha at his invitation on Sept. 1.

James Ward is the author of “No Victim: Liberate Yourself from the Mentality of Defeat”.

“From the time of that tragic event the Wards have communicated a remarkably insightful message about the nations ills,” event organizers said. “They perceive an overemphasis on civil law to the exclusion of spiritual and moral law that underlies civil law and makes it effective.”

There are three kinds of law that govern a society: spiritual law, moral law, and civil law. We are only familiar with civil law—or Constitutional law or political law. But the problem with that is you cannot legislate love, kindness, decency, respect. Those things cannot be legislated because you cannot legislate the human heart. We’ve got to return to spiritual and moral law if we want to see our nation return to a place of civility so that we can co-exist in love and respect, which is what we all want to see.

These 40 days of humble reflection, prayer, and fasting are not meant merely as a shared religious project, but seeks its effectiveness through the direct supernatural action of God himself.

Because we know that only God can change the human heart, my wife, Pastor Sharon, and I, we have been praying intensely for our nation, and not only have we been praying we sensed that God has called us to fast for forty days.

Ward said the fast is not designed as partial or intermittent fasts coupled with consistent prayer over the 40, which began on Sept. 23 and continues to Nov. 3.

Ward said participants have been praying for the following six objectives:

Ward notes: “We need to move toward a society characterized by love, respect, and forgiveness in Christ toward each other, as we endeavor to fulfill Dr. King’s dream of ‘justice running down like water and righteousness like a mighty stream’ (Amos 5:24).”

Other platforms for viewing can be accessed here