Trump campaign attorney Sidney Powell on Thursday confirmed reports that an alleged Dominion-Smartmatic election counting server was confiscated during a raid in Germany.

Powell was asked during the Trump campaign legal team’s press conference: “There were reports that a piece of hardware possibly a server was picked up in Germany. Is that true and is it related to this?” 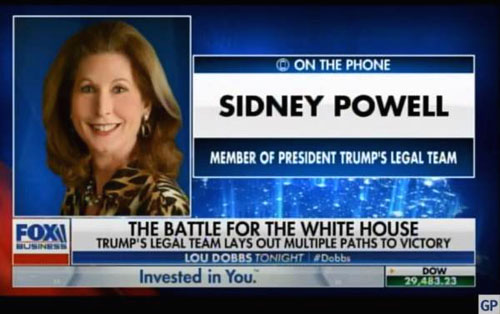 Powell responded: “That is true. It is somehow related to this. But I do not know if good guys got it or bad guys got it.”

Powell elaborated during a Thursday interview with Lou Dobbs on Fox Business:

Dobbs: “There have been great controversy as you know about the reports on a raid on a company Scytl in Germany which held election data presumably… Can you tell what actually did happen there and what you do know?”

Powell: “Well I know that is one of the server centers. There is also one in Barcelona. So it is related to the entire Smartmatic-Dominion operation. We do not know whether the good guys got the servers or whether the bad guys got them. Being on the outside of the government we simply don’t know. I’m hoping it’s the good guys and if they have that then there should be scads of evidence of frankly an international criminal conspiracy of the worst sort.”

Dobbs: “And the presumption then is that they had the records on those servers of all of the votes that were processed by Dominion or Smartmatic.”

Powell: “Yes, the way it works is either the votes can be changed on the ground as they come in. People can watch the votes stream in live. For example there was a Dominion employee, high up, at the Detroit Center on the night of the election. He could have watched the votes come in live and manipulated them in that process. It could have run an automatic algorithm against all the votes which we believe is what happened originally and then the machines had to stop and the count had to stop in multiple places because President Trump’s lead was so great at that point that they had to stop the vote counting and come in and backfill the votes they needed to change the results.”

Powell said during the Thursday press conference that the 2020 election has brought the nation to a historic crossroads not seen since the buildup to the Revolutionary War.

“We have no idea how many Democratic officials paid to have the election rigged in their favor,” Powell said. “This is a massive, well-coordinated effort. It is the 1775 of our generation and beyond.”

“It really happens in two ways,” Powell said of voter fraud involving the machines. “There’s an algorithm that runs that automatically flips all the votes, and then each operator has the ability to go in [and] override settings. They can ignore [a] signature. They can ignore the top line of the ballot. They can go down-ballot and select who they want to change the results for. … This is stunning, heartbreaking, infuriating, and the most unpatriotic acts I can even imagine for people in this country to have participated in — in any way, shape or form.”

“What do we have to do to get you to the truth?” he asked.