Consumer confidence is rapidly rising, and Americans have a much more optimistic outlook on the economy a month after Donald Trump’s election victory, a new survey says.

The CNBC All-America Economic Survey for the fourth quarter found that the percentage of Americans who believe the economy will get better in the next year jumped “an unprecedented” 17 points to 42 percent, compared with before the election. It’s the highest level since President Barack Obama was elected in 2008. 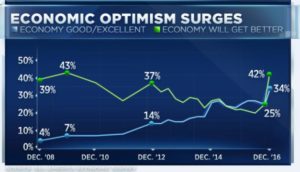 “We’re looking at America moving into a more positive era with regard to economic expectations,” said Micah Roberts, vice president at Public Opinion Strategies, which serves as the Republican pollster for the CNBC survey. “No doubt the election of Donald Trump has ushered that in.”

The survey found Republicans “swung from deeply pessimistic”, with just 15 percent saying the economy would improve in the next year, to “strongly optimistic”, with 74 percent believing in an economic upswing. Optimism among independents doubled – but it fell by more than half for Democrats. Just 16 percent of Democrats think the economy will improve.

The poll of 800 adults from around the country was conducted Dec. 2 to 5, and has a margin of error of 3.5 percentage points. Hart Research Associates served as the Democratic pollsters.

A majority in the survey said they are “comfortable and prepared to support” a Trump presidency. The 56 percent of respondents who now back the president-elect represent a sharp change from the 43 percent who were asked the question just before the election in November by NBC News and The Wall Street Journal. The percentage is driven by 91 percent of Republicans supporting Trump but also 54 percent of independents and 23 percent of Democrats.

Asked which priorities Trump should focus on first, a 40 percent plurality answered, “keeping U.S. jobs from going overseas.” All other priorities were far back and it was the top choice for all parties, but especially the GOP.

“Among Republicans, there’s keeping jobs from going overseas and then there’s everything else — it’s really all about jobs and keeping jobs in the U.S.,” said Democratic pollster Jay Campbell with Hart.

The second-most popular priority was increasing the minimum wage, which has strong support from Democrats and independents.