Poll watcher: In Detroit, not a ‘single ballot’ was disqualified despite authentication problems

Thousands of ballots that “could not be authenticated as legitimate voters” were counted on Nov. 3 at Detroit’s TCF Center, a Republican poll observer said.

“They didn’t disqualify a single ballot” despite numerous ballots featuring voters who were not on the list of legal voters that were published by the Michigan Secretary of State’s office, poll watcher Chris Schnorak said in a video interview posted on YouTube. 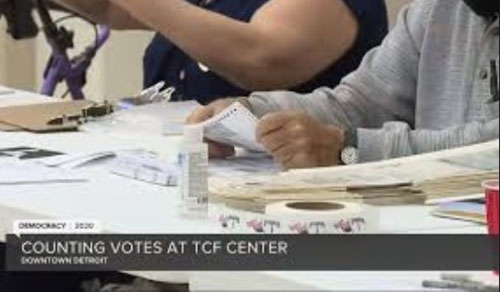 Poll workers at the TCF Center ignored the rules “in order to make ballots go through,” he said. “This affected thousands of ballots that were no good, and were counted.”

In the video, Schnorak notes: “I saw a ballot for Taniqua Haynes, it comes up in the computer as the wrong ballot number. They mailed her ballot number 5748, but that’s not what she sent back. He said that his challenges were rejected by election officials: “They refused to put challenges in the electronic log.”

In Haynes’s case, officials assigned a new ballot number, but Schnorak asserts that it “should have been a spoiled ballot.”

When he observed the ballot process at a tabulation center in Royal Oak, Michigan, Schnorak noted there were 10 challenged ballots out of 25,755.

“I kept seeing a voter birthdate of 1900. I could tell it wasn’t right,” Schnorak said. “I tried to document it, but so many things were going on and I was flustered. I think they were just creating a record for those people in order to process their ballots. They had a systematic way of doing it, they were good at it. It was coordinated and it was organized.”

“This woman followed me and harassed me for five hours,” Schnorak said. Also echoing claims from witnesses, he said the rules were enforced differently to Democratic and Republican poll challengers, saying that GOP observers couldn’t speak to poll workers. Democrats, he said, were able to do so.

A lower court judge dismissed her case Friday, but she took the challenge to the state’s highest court and has said a sample of ballots and envelopes she was able to inspect showed some irregularities.

Also in Arizona, federal officers on Nov. 5 raided a home in the Fountain Hills area in Maricopa County and confiscated eight hard drives, three computers and a bag of USB sticks.

The agents were looking for evidence of a cyberattack on an unnamed organization and stolen voter data, reports say.

AZ Central noted that, according to the warrant, investigators were looking for records, information and communications related to:

The devices allow an individual to remotely access and monitor the voting machines and data on a real-time basis.

EDevice of Bordeaux, France was purchased for $106 million in 2016 by iHealth, a U.S. subsidiary of China’s Tianjin Andon Group.

The post noted that the revelation “should make every voting machine that uses” the modems “suspect and open to forensic analysis. Use would be indicated by the port seal being broken. These modems communicate with a central reporting server also.

Another Twitter post noted: “The cost for the cellular modems is listed in a inventory of equipment needed for Calhoun County Michigan”.

A voter rights group informed the Department of Justice on Dec. 3 of a link between the Nevada election emails system and a Pakistani company with ties to military and intelligence, The Epoch Times reported.

True the Vote requested the Nevada voter file from the secretary of state after the Nov. 3 election. The state responded with a voter file in an email, but the message was copied to Waqas Butt, CEO of Pakistani-based Kavtech Solutions Ltd.

In a letter to Assistant Attorney General for National Security John Demers, Catherine Engelbrecht, president of True the Vote, wrote that she was shocked to discover the Pakistani address in the carbon copy field of the email.

“The fact that this company was cc’d on an email containing access to the Nevada voter registration database appears to be evidence of a breach within the Nevada Secretary of State’s email system,” Engelbrecht wrote.

“Obviously, the problems that such a breach may evidence include access to at least the voter registration information of Nevada residents. At worst it could reveal a breach that gives a foreign power access to not only the State of Nevada’s systems, but also to the email systems of anyone whom the State communicates with via email.”

Kavtech Solutions Ltd. is based in Lahore, Punjab Province, in Pakistan, according to the letter.

2020 election, fraud, not a ‘single ballot’ was disqualified despite authentication problems, Poll watcher: In Detroit, WorldTribune.com