Poll: Utah voters ready for Romney — to take a hike

The Beehive State wants Sen. Mitt Romney to buzz off.

A new poll from OH Predictive Insights found that 63 percent of registered Republican voters in Utah want Romney out, compared to just 35 percent who support the never-Trump RINO. 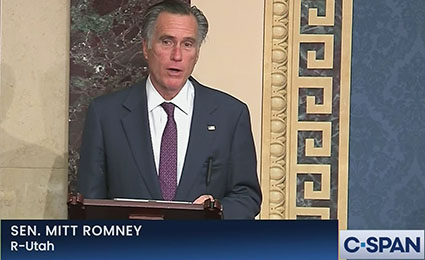 The poll also found that 58 percent of registered Republicans said there is room for Donald Trump in the GOP, compared to 42 percent who said the same about Romney.

Romney, a former Massachusetts governor and failed presidential candidate, has been an outspoken critic of Trump and is the only GOP senators to vote to impeach President Trump twice.

“In the 2012 Presidential election, Mitt Romney earned the largest share of the vote in Utah of any Republican presidential candidate since Reagan in 1984,” said Mike Noble, chief of research for OH Predictive Insights.

“The data shows that Utahns’ opinions have flipped since 2012 — with two-thirds of GOP voters preferring a Republican senator other than Mitt Romney. He is more vulnerable than ever in a primary election.”

Romney is not up for re-election until 2024.

Observers say it is unlikely he will somehow magically reverse Utah voters’ minds by then.

An indication of that came earlier this year when Romney was booed and heckled while delivering an address at the Utah GOP convention.