A majority of respondents in a new poll said it is “likely” cheating affected the outcome of the 2020 presidential election.

The Rasmussen Reports poll found that 51 percent thought Joe Biden’s path to the White House was paved by fraud. 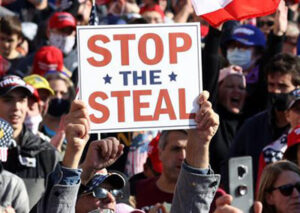 Some 47 percent said it is likely Democrats stole or destroyed ballots for former President Donald Trump. That included 75 percent of Republicans and 30 percent of Democrats. An even 50 percent said that it is unlikely ballots were destroyed.

The survey also found that most favor voter identification.

By more than a two-to-one margin, the respondents reject claims that voter ID laws are discriminatory.

Majorities of all racial groups – 59 percent of whites, 56 percent of blacks, and 63 percent of other minority voters – say it is more important to make sure there is no cheating in elections than to make it easier to vote.

Likewise, majorities of all racial groups – 64 percent of whites, 59 percent of blacks, and 58 percent of other minority voters – reject the claim that voter ID laws discriminate against some voters.

“Only 22 percent of voters say it is currently too hard to vote, while 34 percent said it’s too easy to vote, and 41 percent say the level of difficulty in voting is about right.”