The majority of registered voters are against Joe Biden’s move to allow biological males to compete in women’s sports, a new poll from a left-leaning outlet found. 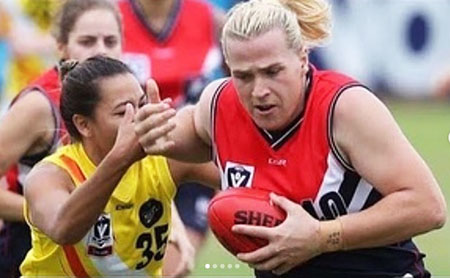 The Politico/Morning Consult poll found 53 percent of registered voters support banning transgender athletes from competing in women’s sports, versus a third who oppose such a ban.

The poll “shows broad support” for keeping biological males out of female sports and extends “across gender, age and, to a lesser degree, party,” Politico reported.

In his address to CPAC 2021, former President Donald Trump hammered Biden over the issue:

“Joe Biden and the Democrats are even pushing policies that would destroy women’s sports,” Trump said. “Lot of new records are being broken in women’s sports. Hate to say that, ladies, but got a lot of new records that [are] being shattered. You know, for years, the weightlifting, every ounce is like a big deal for many years. All of a sudden, somebody comes along and beats it by 100 pounds.”

Trump added at CPAC: “Now, young girls and women are incensed that they are now being forced to compete against those who are biological males. It’s not good for women. It’s not good for women’s sports, which worked so long and so hard to get to where they are. The records that stood for years, even decades, are now being smashed with ease, smashed.

“If this is not changed, women’s sports, as we know it, will die, they’ll end, it’ll end. What coach, if I’m a coach, you know, I want to be a great coach, what coach, as an example, wants to recruit a young woman to compete if her record can easily be broken by somebody who was born a man? Not too many of those coaches around, right? If they are around, they won’t be around long because they’re gonna have a big problem when the record is, ‘We’re 0-16, but we’re getting better.’ No, I think it’s crazy, I think it’s just crazy what’s happening. We must protect the integrity of women’s sports — so important.”

“I want to congratulate all the great female athletes out there,” Trump Jr. wrote on Instagram in a post that included photographs of biological males competing against women.