Playing defense: Who are Kim Jong-Un and Donald Trump kidding with their war of words?

It wasn’t exactly a declaration of war, but it did come close. What else to make of President Trump’s remark that the U.S. might “totally destroy North Korea”? It was one thing to belittle Kim Jong-Un as “rocket man” but quite another to threaten annihilation of a country torn apart by U.S. warplanes in the first Korean War.

If nothing else, Trump’s speech at the UN General Assembly will be remembered as one of those classic moments at which a head of state spoke for shock effect to a more or less captive audience. His words were reminiscent of Soviet leader Nikita Khrushchev in 1960 banging a shoe, promising to “bury you,” or Palestine Liberation Organization leader Yasser Arafat in 1974 wearing a pistol belt, saying he carried “an olive branch in one hand and a freedom fighter’s pistol in the other.” 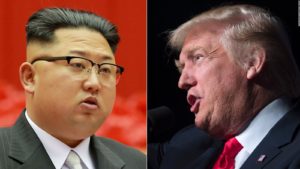 Just as such words rang hollow, bearing little relationship to the ability of those loud-talking figures to carry out their rhetorical threats, so Trump’s remarks also seem a little removed from reality. Is he really ready to order “massive retaliation” needed to destroy an impoverished country of 25 million? Might he order air strikes on the North’s nuclear and missile facilities, many hidden in caves and tunnel complexes? How carefully has he thought through the consequences?

For Trump, the gulf between rhetoric and reality is often quite wide. He’s encountered tremendous difficulties doing away with Obamacare, the affordable health care instituted under President Obama, and he’s far from fulfilling his vows to keep out a flood of immigrants from Latin America to the Middle East. His presidency could fall apart totally on whatever decisions he makes on North Korea.

Let’s imagine, hypothetically, the consequences of a pre-emptive strike on a missile facility. Would North Korean artillery really open up on Seoul and Incheon, as forecast? Might Kim Jong-Un order missile shots aimed at the U.S. headquarters complex at Pyeongtaek? Would the North Koreans launch mid-range missiles in the general direction of the U.S. air and naval bases on Guam?

It’s possible, of course, the North Koreans would not respond so decisively. For North Korea, the risk of still greater counter-strikes might be too high to do much other than escalate the rhetoric as thousands massed on Kim Il Sung Square in Pyongyang shouting hateful promises to “destroy” the U.S. – all quite harmless.

Who, however, needs this game of dare and double-dare? In fact, Trump has little support for waging Korean War II while immersed in never-ending conflict in the Middle East and Afghanistan. China and Russia, having given tepid support to U.N. sanctions against North Korea, would strongly oppose military intervention against their old Korean War ally.

A campaign against North Korea of the sort that Trump has suggested would also trigger opposition in both the U.S. and South Korea. The United States is in no mood for war. Kim Jong-Un has been the target of outrage, of satire, of denunciations for both his nuclear program and human rights abuses, but not many Americans are so upset as to be willing to sacrifice lives fighting his regime.

Anti-war sentiment may be still stronger in South Korea. President Moon is all for maintaining the alliance with the U.S., and he has also coordinated with Japan’s Prime Minister Shinzo Abe on mutual defense against North Korea. They met with Trump in a trilateral summit at the UN at which presumably they came to an understanding on what to do, were Kim Jong-Un to order a strike against any of their bases.

They also had to have ignored the proposal of Moon Chung-In, the retired Yonsei professor, for a freeze on North Korean nuclear and missile tests in exchange for a freeze on U.S. and South Korean war games. Professor Moon, an “adviser” to President Moon, has been spouting the same line for years. Obviously North Korea would not be cutting out its own war games while going on fabricating missiles and nukes.

For President Moon, the answer still lies in persuading the North of dialogue on some level. He may not be fulfilling the demands of leftists anxious to disavow the U.S. alliance, but he’s not going along with all of Trump’s notions either.

After the storm over Trump’s words dies down, where do we go from here? Trump did say the U.S.would destroy North Korea in “defense. ” Kim Jong-Un has often said he needs nukes for “defense.” At least that’s one word on which they both agree.

Donald Kirk has been covering war and peace in the region for decades.He’s at kirkdon4343@gmail. com.

Playing defense: Who are Kim Jong-Un and Donald Trump kidding with their war of words?, WorldTribune.com