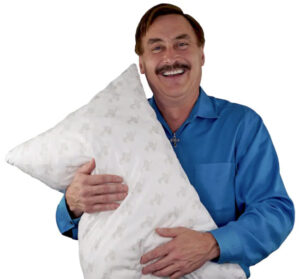 In an explosive interview Tuesday, Mike Lindell, the MyPillow founder who believes the 2020 presidential election was stolen, … [charged] Twitter criminally stole his identity to send out messages that were not his.

The pillow entrepreneur, who was banned permanently by Twitter on Monday, said …  Twitter had kept his official account active, though Lindell was locked out of controlling it, and the social-media giant then assumed his identity to post and retweet politically correct messages he never authorized. “It was horrific … Twitter was acting as me … That’s like identity fraud. That’s criminal,” Lindell said.

“So we have now total hammerlock of the present by the woke billionaires,” Steyn added. “This is all happening very fast. It’s all accelerating. … Mike Lindell has basically been 86’d. He’s sleeping ‘the big sleep’ because he questioned the election. Who passed a law saying you can’t question the election?”