The Democratic Party’s seismic shift to the left, in which socialists play a prominent role, helped convince Pelosi to change her tune. 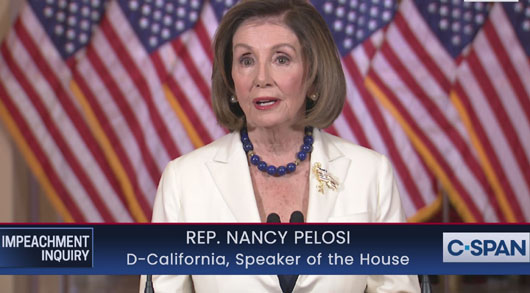 So did the corporate media, The Federalist columnist Mollie Hemingway noted.

“The media always owned this impeachment process,” Hemingway wrote in a Jan. 30 op-ed. “Pelosi did her best to avoid impeachment but the media all but forced her into it. They championed it every step of the way and provided help, including the blocking of arguments against it.”

Hemingway noted that it is “fairly standard to name whistleblowers and to do journalism figuring out who key players are,” but many in the media “steadfastly avoided looking into him and his motivations or how that might have affected the entire proceedings.”

Hemingway continued: “Each day provided evidence that the media didn’t just want Trump impeached and removed from office, but desperately wanted that. There are videos of scrums of reporters fighting with Republicans over their case, but none of them fighting with Democrats. Republican senators are hounded by reporters to pressure them to change their vote, but Democratic senators don’t receive the same treatment.

“It didn’t help that in the midst of the circus, a CNN host and his panel were openly yukking it up about how Republicans are all stupid.”

The Media Research Center’s L. Brent Bozell and Tim Graham noted in a FoxNews.com op-ed that “Journalists constantly moan that their credibility is shot and blame ‘anti-media’ messages from Trump and the conservative media. Not so. They’ve lost the public’s respect all by themselves. They had every opportunity to avoid dreadfully obvious partisan flip-flopping on this impeachment. Instead, they flagrantly indulged their Democratic buddies all over again.”

The corporate media also played along as Rep. Adam Schiff and the other Democrat House impeachment managers regurgitated the Trump-Russia “collusion” narrative.

Historian and columnist Victor Davis Hanson noted in a Jan. 26 op-ed for American Greatness that, even with the Trump-Russia investigation being thoroughly debunked the House impeachment managers could not “finish a sentence without exclaiming ‘Russian collusion,’ as if it has now transmogrified into some exotic foundational myth.”

Hanson noted that “it is now as if neither Mueller nor Horowitz ever existed, as if we have forgotten the thousands of hours of investigation that found no Russian collusion, but indeed discovered the systematic warping of the FISA court by allegations of such falsities. As if to prove that the Mueller investigation was never biased, Andrew Weissmann now appears on MSNBC as a legal analyst to continue what he once did for Mueller, in the manner of the post-Russian ‘collusion’ careers of Andrew McCabe, James Comey, and James Clapper.”

Once the current impeachment indictment leads to an inevitable Senate vote of exoneration, what’s next?

Hanson added that he mentioned these “post-impeachment psychodramas because they are symptomatic of a sick Democratic patient. Yet the endless effort to destroy Trump before the election in the progressive mind has a certain logic given the current Democratic dilemma.”

The Democratic Party’s 2020 agenda “is weaker even than the unlucky candidate who will be expected to run on it,” Hanson wrote. “Given those realities, there is a perverse logic in destroying Trump first, and worrying later about offering an alternative agenda.”

Hanson continued: “Very few politicians in memory could physically endure the invective, hate, and furor aimed at Trump and his family daily over the last three years. Much less, could any president function with 90 percent negative media coverage, moles in the executive branch monitoring his every breath, and an unhinged opposition whose reason to get up in the morning is to end Trump.”

With a booming economy leading a huge list of Trump accomplishments, Democrats’ last hope may be “to destroy Trump physically,” Hanson wrote. “He will be 74 in June. By the standards of senior medicine, they feel Trump is locked in a self-destructive cycle: little sleep, little exercise, poor diet, too heavy, too stressed.”

Democrats, Hanson added, “believe that one more whistleblower, just a bit more impeachment, a little more Nadler or Schiff, a pinch more of Pelosi, or another Ukrainian or Russian liar might finally give Trump a stroke or malignancy. With Trump debilitated, they might have a chance against a more traditional Republican.

“We will be down to the elemental after impeachment: if you can’t beat Trump legislatively, judicially, or electorally, and if you can’t impeach, convict him and remove him, perhaps you can simply physically destroy him.”