Paris when it sizzles

PARIS — A Summer heatwave has enveloped the French capital in a blanket of dry heat.

Following a Winter and Spring of churning discontent from the Yellow Vests, Gilet Jaunes, anti-government demonstrations, the current vacation season should have come as a welcome respite to the protest weary French.  And you know it’s Summer when the classic Tour de France bicycle race ends amid the splendor of the Parisian Champs-Elysees. 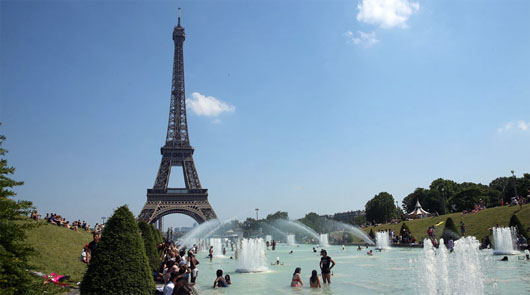 A nexus of civilization, culture and romance, Paris is well represented by its great monuments, museums and vibrant Avenues reflecting its global status.  Though the capital has captivated tourists and Francophiles alike, as with all large urban areas the metropolis strains under the pressure of traffic chaos, perpetual construction, and congestion.

Between the world wars and certainly after 1945, the Americans were the principal tourists.

Twenty-five years ago, Paris became the craze for busloads of Central Europeans especially from Poland and Hungary who were finally allowed to travel and had the means to do so. Then came the Russians, Mainland Chinese and South Koreans.

Though renowned for its shopping, Americans are no longer the proverbial big spenders. Nor are the Japanese. The new clientele in the Grand Department Stores such as Printemps and Galeries lLafayette are Mainland Chinese and South Koreans.  Special boutiques and shop assistants cater to this wealthy and expanding market. Japanese big spenders are so 20 years ago.

Both the cartographical and spiritual center of Paris focuses on Notre Dame cathedral, this Gothic masterpiece which has been an architectural icon of France since the Middle Ages.

The tragic Notre Dame fire in mid-April has left a scar on the landscape; it’s not at first obvious since the magnificent structure still stands but the cathedral is missing the smaller spire which collapsed during the inferno.  Massive rebuilding and debris clearing efforts are moving apace to restore the roof and spires of this magnificent church.

Most of the funds are from the private sector; Bernard Arnault and Francois Pinault of the Bettencourt Foundation have pledged nearly $500 million.  Another major reconstruction effort

led by Michel Picaud is the American-organized Friends of Notre Dame which has so far collected $8 million towards the painstaking restoration effort.

Already the countdown to the Olympics has begun!  While Tokyo will host the 2020 Summer Games, Paris shall be the venue for the Olympics 2024, commemorating the centenary of hosting the Games in 1924.  There’s an $8 billion budget for the sporting spectacle which is expected to attract 4 million spectators.

According to the respected newspaper Le Figaro, the 2024 Games offer an “Economic Challenge for France” with revenues expected to bring $12 billion in commercial benefits.  Significantly the Summer Games are expected to create 150,000 jobs, this in a country which still faces an unemployment rate of 8.6 percent or more double that of the USA.

As with most Olympic projections, the impressive numbers have a way of getting totally out of control and the looming debt remains an Albatros for a generation, but that’s another story.

Most major cities seem to be under permanent reconstruction, and Paris is no exception.   Mayor Anne Hidalgo remains highly unpopular having the same haughty style as New York’s Bill de Blasio who has deliberately made car travel, parking and tax burdens difficult.

Having faced eight months of disruptive Gilet Jaunes demonstrations, President Emmanuel Macron, finally appears to have reached a political plateau, but with only 31 percent support.  Ironically Macron was elected just over two years ago in a political landslide.

Amazingly despite warm Summers, Parisian public transit, the vast fleet of new busses and the old but tried and true Metro (subway) lack air conditioning. The standard excuse is; well it never really gets hot here in the Summer. Really…?  Well for a nation which appears almost theologically wedded to the gospel of Global Warming, you would presume public transit would at least have air conditioning as do other major cities.

For a country whose railroads are second to none and where the high-speed TGV trains reach speeds of 177 MPH (294 KMs), it remains almost a bizarre contradiction that air conditioning seems such a reach.

With high temperatures in the 90’s outside, isn’t it logical to have buses (most of which are hybrid or electric) with basic cooling?  Back during the epic Caincule/ heatwave of 2003, everyone thought that air conditioning would soon become commonplace; it now has in hotels, stores and many restaurants, but somehow not on the sprawling RATP transit system.  Go figure.

Pity Paris in the Summer.