Joe Biden has chosen for one of the most important health care positions in U.S. government the Pennsylvania health secretary whose covid policies critics say led to the deaths of thousands of nursing home patients. 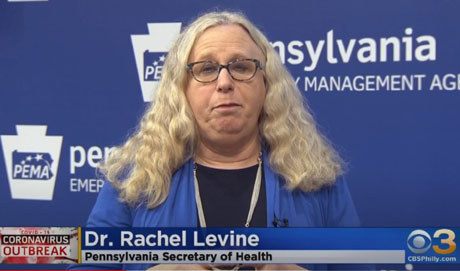 Levine had directed on March 18, 2020 that “nursing care facilities must continue to accept new admissions and receive readmissions,” which “may include stable patients who have had the COVID-19 virus.” The state provided more detailed guidelines on May 12. Those guidelines said hospitals treating people for a non-covid illness need to test them for covid before releasing them to a nursing home. But if they test positive, nursing homes should still admit them.

According to data from The New York Times published last month, six of the 10 long-term care facilities with the most coronavirus deaths nationwide are in Pennsylvania.

“Our most vulnerable Pennsylvanians were being forced to live within a ticking time bomb,” state Rep. Russ Diamond said in a May 28 op-ed calling on Levine to resign or be removed from office by Gov. Tom Wolf (neither happened).

“This exceptionally rapid death rate amongst Pennsylvania’s most vulnerable is due to Levine’s lack of responsibility and competence,” Diamond said. “Levine’s actions have made national news and spurred Congressman Scott Perry to send a formal request to the U.S. Department of Human Services Office of Investigations to immediately open an independent investigation into Levine’s guidance to nursing facilities.”

Levine also drew criticism in May 2020 when she removed her 95-year-old mother from a personal care home during a surge of cases in nursing homes, according to Penn Live.

“Levine removed her own mother from a central Pennsylvania personal care home and checked her into a premium hotel, but did not reveal that fact nor her reasons to the general public until questioned by ABC27 reporters,” Diamond noted. “This is the health care equivalent of insider trading, except that when it happens in the investment industry, mere dollars are at stake. Human lives were at stake here.”

In August, Levine drew further criticism when she cited a little-known law from 1955 as a reason for withholding from the public data on the number of coronavirus tests the state was conducting and the number of cases in nursing homes.

Levine used the law to refuse open records requests, including one from the Delaware Valley Journal seeking emails sent or received by health officials containing the word “ECRI.” (ECRI is the patient safety and health-care research institute that the state paid $1 million to reduce the spread of coronavirus in nursing homes.)

“Nursing homes were driving the crisis in Delaware Valley counties,” Delaware Valley Journal Editor Todd Shepherd said. “It’s incredibly important for the readers I serve to have a glimpse of how their government was behaving.”

Shepherd said he was surprised to learn that the health department considered those emails to be reports of disease and epidemiological investigations, which are exempt from disclosure.

“It would be a shame if the department is able to take a law that is intended to shield individual privacy and instead they are able to twist that and shield their own activities and behaviors,” he said.

Another state lawmaker who called for Levine’s resignation last year, Sen. Doug Mastriano, said Levine had committed the equivalent of policy malpractice in her handling of the coronavirus pandemic and its spread through nursing homes and other long-term care facilities.

“Our secretary of health, Dr. Levine, decided that it would be good to allow covid-positive patients to be returned to elder-care facilities. And as a result of that, it broke out like fire,” Mastriano said.

“The very same people our secretary of health said were going to be vulnerable… It unleashed heck upon our dearly beloved fathers, mothers, grandparents, aunts and uncles. I think that’s unconscionable, unacceptable, and that secretary needs to be held accountable for that awful decision,” Mastriano said.

The fact that Levine is transgender is meaningless. Her gender identity means nothing when it comes to instituting health policy first for Pennsylvania and now, apparently, for the entire United States.

Yet, to check-all-boxes Biden and the leftist media, it means everything.

Despite all of the reporting and investigations into Levine’s horrendous policies, Biden said Levine “will bring the steady leadership and essential expertise we need to get people through this pandemic — no matter their zip code, race, religion, sexual orientation, gender identity, or disability — and meet the public health needs of our country in this critical moment and beyond. She is a historic and deeply qualified choice to help lead our administration’s health efforts.”

Corporate media lauded the selection, noting Levine would be the first transgender official in U.S. history if confirmed by the Senate.

All that matters is whether Levine is competent enough to do the job she is being nominated for.

Many, many critics and residents of Pennsylvania say no.

In a May 8 op-ed for The Mercury calling for Levine’s resignation as health secretary, Lowman S. Henry noted:

“Today thousands of older Pennsylvanians have died, trapped in facilities that had no way of preparing to handle the rapidly spreading virus. Worse, sources have told me that the Department of Health has cut back on inspections at such facilities. They have even denied testing supplies to at least one nursing home which had requested kits to test staff for coronavirus.

“This adds up to epic ineptitude such that those responsible no longer have the credibility or public confidence to continue in office.”

Pa. health secretary whose covid policies were called ‘a recipe for disaster’ picked for prime Biden health role added by World Tribune on January 19, 2021
View all posts by World Tribune →