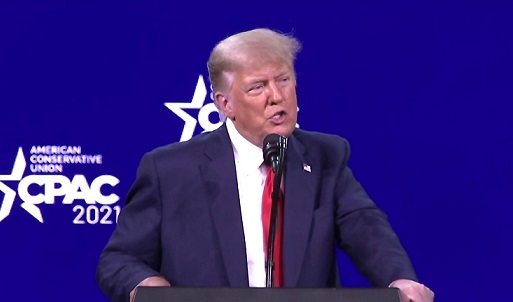 Trump issued the following statement through his Save America Pac:

“So many people would like to thank the brave and patriotic Republican State Senators from Arizona for the incredible job they are doing in exposing the large scale Voter Fraud which took place in the 2020 Presidential Election. Their tireless efforts have led to a massive recount, ballot examination, and full forensic audit, undertaken by experts retained by the State Senate, with results to be announced within six weeks. The Democrats, upon hearing the news of the Court Order, have sent 73 lawyers to Arizona in an effort to stop this recount and full transparency because THEY KNOW WHAT THEY DID! The Democrats are desperate for the FRAUD to remain concealed because, when revealed, the Great States of Wisconsin, Michigan, Georgia, New Hampshire, and the Great Commonwealth of Pennsylvania, would be forced to complete the work already started. The Arizona recount and examination will be on live TV (OAN) for all to watch.

“Why are the Democrats so desperate to stop this Election Fraud from being revealed? That answer is obvious! The Governor of Arizona, Doug Ducey, has been shockingly of zero help to the State Senate. He wants to “pretend” the election was free and fair. What are he and the Maricopa County Commissioners trying to hide? Our country needs the truth of the scam 2020 Election to be exposed. If it is not, just as if we have “no borders,” we cannot be a Great Nation. Honest elections are America’s Heart and Soul. We must never allow this to happen to our Great Country again. Thank you State Senators and others in Arizona for commencing this full forensic audit. I predict the results will be startling!”

While any leftist media coverage of the audit is limited to screeching about “conspiracy theories,” the only network devoting any kind of comprehensive coverage of what is a major news story is OAN.

Gen. Thomas McInerny noted on Telegram: “Ask yourself why Newsmax and Fox News are not reporting the Arizona audit.”