March 2 is Read Across America Day. It also is the birthday of Theodor Seuss Geisel — or Dr. Seuss who has frequently been mentioned in presidential proclamations or actions on that day.

In 2016, then-President Barack Obama used the occasion to declare Dr. Seuss “one of America’s revered wordsmiths.” 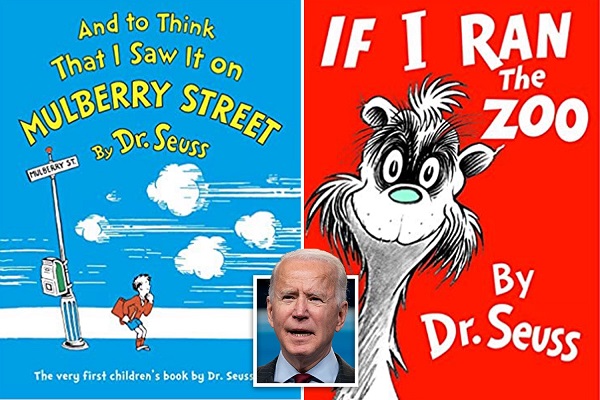 In 2021, Joe Biden bowed to the leftist mob and omitted any mention of Dr. Seuss’s books in his Read Across America Day proclamation.

The Biden cancel culture team’s decision coincided with six of the beloved author’s books being pulled from publication for alleged “racist and insensitive” depictions.

Dr. Seuss Enterprises announced its decision to cancel the publication of six popular Dr. Seuss books, including “And to Think That I Saw It on Mulberry Street”, “If I Ran the Zoo”, “McElligot’s Pool”, “On Beyond Zebra!”, “Scrambled Eggs Super!”, and “The Cat’s Quizzer”.

“These books portray people in ways that are hurtful and wrong,” Dr. Seuss Enterprises told The Associated Press, claiming that ceasing sales reflects just “part of our commitment and our broader plan to ensure Dr. Seuss Enterprises’ catalog represents and supports all communities and families.”

The company said it made the decision after “listening” to feedback from its audience, which included teachers and “specialists in the field,” i.e. the leftist cancel culture mob.

Breitbart News reported on March 1 that Loudoun County Public Schools in Virginia omitted the work of Dr. Seuss from its Read Across America lineup, citing racial “undertones” in the books.

Breitbart News tweeted: “Dr. Seuss is now racist. Consider this your woke Cancel Culture warning in the event your children are spotted with copies and/or authorities find out you’ve read these stories to your children.”

Observers noted that Team Biden, which includes several Obama administration officials, is so closely attached to the cancel culture mob that it ignores what Obama himself said about Dr. Seuss.

In Obama’s 2014 Read Across America Day proclamation, he said: “[Dr Seuss’] tales challenge dictators and discrimination. They call us to open our minds, to take responsibility for ourselves and our planet.”

In 2015, Obama stated: “The works of Theodor Seuss Geisel, better known to us as Dr. Seuss, have sparked a love for reading in generations of students. His whimsical wordplay and curious characters inspire children to dream big and remind readers of all ages that ‘a person’s a person no matter how small.’ ”

Theodor Seuss Geisel was born in Springfield, Massachusetts on March 2, 1904. He died in 1991. Dr. Seuss remains popular, earning an estimated $33 million before taxes in 2020. Forbes listed him No. 2 on its highest-paid dead celebrities of 2020, behind only the late pop star Michael Jackson.

Meanwhile, a new poll suggests the next thing Americans want to “cancel” is cancel culture.

The Harvard CAPS-Harris poll, released to The Hill on Monday, shows 64 percent percent of respondents believe cancel culture poses a threat to freedom in the U.S., while 36 percent disagreed. And while conservatives were more dominant in this opinion — 80 percent to 20 percent — the subject has divided Democrats as well.

Among liberal voters, 48 percent believe cancel culture is a threat to personal freedom; a narrow margin against the 52 percent who do not.

Penn added: “Tech companies beware that the public sees them of acting out of bias tilted towards the Democrats and voters are calling for new regulations to ensure fairness and openness. Amazon, in particular, still has a strong image compared to Facebook and Twitter, but that image may start to erode if they expand the banning of books on their platform.”