On election night, Twitter censors Trump, but not Biden

President Donald Trump said early Wednesday morning that what was happening was a “fraud on the American public.” 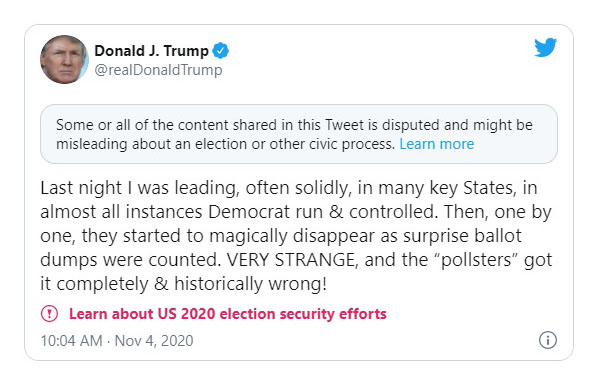 The first censored tweet: “We are up BIG, but they are trying to STEAL the Election. We will never let them do it. Votes cannot be cast after the Polls are closed!”

According to Twitter, the tweet is considered “misleading about an election or other civic process” and violates their Civic Integrity Policy. Due to this violation, the Big Tech company prohibited users from engaging, commenting, retweeting, or even sharing a link to the tweet.

Of course, the major media was complicit in the election interference occurring before Americans in real time.

The censorship of Trump came after NBC News personality Ben Collins publicly proclaimed he had reached out to Twitter about Trump’s tweets. Shortly after Collins complained to Twitter, restrictions were placed on Trump’s original tweet.

Twitter explicitly stated that “claiming victory before election results have been certified” is considered a violation.

Twitter did not censor a tweet from Biden stating that he was going to win the election.

The president tweeted: “Last night I was leading, often solidly, in many key States, in almost all instances Democrat run & controlled. Then, one by one, they started to magically disappear as surprise ballot dumps were counted. VERY STRANGE, and the “pollsters” got it completely & historically wrong!”

As independent news outlets reported, a very suspicious ballot dump in Michigan in the dead of night went 100 percent to Biden. The same occurred in Wisconsin.

In a Senate hearing last week, Twitter CEO Jack Dorsey blatantly lied to Congress and claimed that his company has never censored the president, despite many examples that the company had.