There is no doubt that Democrats “are vastly more supportive of Internet censorship not only by large corporations but also by the state, ” independent journalist Glenn Greenwald noted in an Oct. 28 analysis on substack. 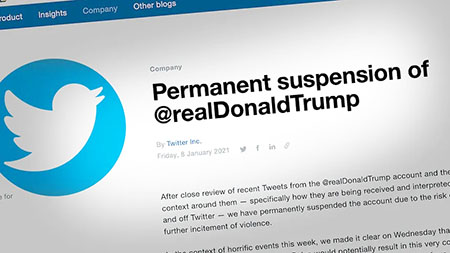 The rapidly expanding “disinformation” industry, Greenwald noted, is composed of self-proclaimed experts who are “grounded in little more than crude political ideology, claims the right to officially decree what is ‘true’ and “false” for purposes of, among other things, justifying state and corporate censorship of what its “experts” decree to be ‘disinformation.’ ”

To counter this regime, those committed to free speech must continue to create new platforms that are “fully fortified in all ways — ideologically, politically and technologically — to resist encroachments into our most basic right: the right to freely express ourselves, to freely communicate with one another, and to freely challenge, question and dissent from the policy agendas, dictates and decrees of institutions of authority,” Greenwald wrote.

Greenwald pointed to free speech platforms like substack and Rumble and his new “System Update” program on Rumble which is “dedicated to advancing this central cause.”

The censorship industry is funded by the likes of George Soros and Pierre Omidyar along with U.S., British and European Union intelligence agencies.

“These government-and-billionaire-funded ‘anti-disinformation’ groups often masquerade under benign-sounding names: The Institute for Strategic Dialogue, The Atlantic Council’s Digital Forensics Research Lab, Bellingcat, the Organized Crime and Corruption Reporting Project,” Greenwald wrote. “They are designed to cast the appearance of apolitical scholarship, but their only real purpose is to provide a justifying framework to stigmatize, repress and censor any thoughts, views and ideas that dissent from neoliberal establishment orthodoxy. It exists, in other words, to make censorship and other forms of repression appear scientific rather than ideological.”

The censorship regime immediately seizes upon any new crisis whether “genuine or contrived” to “justify all new levels and types of online censorship, and increasingly more and more offline punishment,” Greenwald wrote.

The false Trump-Russia collusion narrative was a prominent springboard for the censorship regime as it led to “new groups devoted to ‘monitoring’ what they deem disinformation and new policies from media outlets to censor reporting of the type that WikiLeaks provided about the DNC and Clinton campaign in 2016,” Greenwald noted. “This censorship frenzy culminated in the still-shocking decision by Twitter and Facebook to censor The New York Post’s reporting on Joe Biden’s activities in China and Ukraine based on documents from Hunter Biden’s laptop that most media outlets now acknowledge were entirely authentic — all justified by a CIA lie, ratified by media outlets, that these documents were ‘Russian disinformation.’ ”

The protest at the U.S. Capitol on Jan. 6 “was used in similar ways,” Greenwald noted, “though this time not merely to un-person dissidents from the Internet but also to use Big Tech’s monopoly power to destroy the then-most-popular app in the country (Parler) followed by the banning of the sitting elected President himself, an act so ominous that even governments hostile to Trump — in France, Germany, Mexico and beyond — warned of how threatening it was to democracy to allow private monopolies to ban even elected leaders from the Internet. Liberal outlets such as The New Yorker began openly advocating for Internet censorship under headlines such as ‘The National-Security Case for Fixing Social Media.’ ”

Then came Covid, which “ushered in still greater amounts of censorship. Anyone who urged people to use masks at the start of the pandemic was accused of spreading dangerous disinformation because Dr. Anthony Fauci and the WHO insisted at the time that masks were useless or worse. When Fauci and WHO decided masks were an imperative, anyone questioning that decree by insisting that cloth masks were ineffective — the exact view of Fauci and WHO just weeks earlier — was banned from Big Tech platforms for spreading disinformation; such bans by Google included sitting U.S. Senators who themselves are medical doctors. From the start of the pandemic, it was prohibited to question whether the Covid virus may have leaked from a lab in Wuhan — until the Biden administration itself asked that question and ordered an investigation to find out, at which point Facebook and other platforms reversed themselves and announced that it was now permissible to ask this question since the U.S. Government itself was doing so,” Greenwald noted.

The U.S. Government and its allies in Big Tech “exploited the two-year Covid pandemic to train Western populations to accept as normal the rule that the only views permitted to be heard were those which fully aligned with the views expressed by institutions of state authority,” Greenwald added. “Conversely, anyone dissenting from or even questioning such institutional decrees stood accused of spreading ‘disinformation’ and was deemed unfit to be heard on the Internet. As a result, blatant errors and clear lies stood unchallenged for months because people were conditioned that any challenging of official views would result in punishment.”

The point has now arrived, Greenwald noted, “where every crisis is seized upon to usher in all-new forms of censorship. The war in Ukraine has resulted in escalations of censorship tactics that would have been unimaginable even a year or two ago. … One of the easiest and surest ways to be banned these days from Big Tech platforms is to reject the core pieties of the CIA/NATO/EU view of the war in Ukraine, even if that dissent entails simply affirming the very views which Western media outlets spent a decade itself endorsing, until completely changing course at the start of the war — such as the fact that the Ukrainian military is dominated by neo-Nazi battalions such as Azov, especially in the Eastern part of the country. Regardless of one’s views on the Biden administration’s involvement in this war, surely it requires little effort to see how dangerous it is to try to impose a full-scale blackout on challenges to U.S. war policy, especially given the warning by Biden himself that this war has brought the world closer to nuclear armageddon than at any time since the 1962 Cuban Missile Crisis.”

Greenwald continued: “It cannot be overstated how closely aligned Big Tech censorship is with the agenda of the U.S. Security State. And it is not hard to understand why. Google and Amazon receive billions in contracts from the CIA, NSA and Pentagon, and, as we reported here in April, the most vocal lobbyists working to preserve Big Tech monopoly power are former Security State operatives. Illustrating this alignment, Facebook — at the start of the war in Ukraine — implemented an exception to its rule banning praise for Nazi groups by exempting the Azov Battalion and other neo-Nazi Ukrainian militias.”

The core function of the censorship regime “is to shield propaganda that emanates from ruling class centers of power from critique, challenge and opposition. It is designed to ensure that Western populations hear only the assertions and proclamations of state and corporate elites, while their adversaries and critics are at best marginalized (with warnings labels and other indicia of discredit) or banned outright,” Greenwald wrote.

The censorship regime also has at its disposal an army of corporate “journalists.”

“No discussion of this growing and limitlessly dangerous censorship regime would be complete without noting that central role played by the West’s largest media corporations and their largely-millennial, censorship-obsessed liberal employees who bear the deceitful corporate Human Resources job title of ‘journalist,’ ” Greewald wrote. “The most beloved journalists of modern-day American liberalism are not those who divulge the secret crimes of CIA, or the chronic lies that emanate from the Pentagon and other arms of the U.S.’s endless war machine, or monopolistic abuses of Big Tech. Indeed, journalists who do that work — challenging and exposing the secrets of actual power centers — are the ones most hated by liberals in light of their adoration for those institutions. That is what explains their support for Julian Assange’s ongoing imprisonment and Edward Snowden’s ongoing exile as the only way to avoid the same fate as Assange is suffering.”

The current journalistic icons of the American Left “are not those who confront establishment power but rather serve it: by relentlessly attacking ordinary citizens as punishment for expressing views declared off-limits by these journalists’ establishment masters,” Greenwald wrote. “As I have previously reported, there is a horde of corporate employees at media behemoths with the classic mindset of servants of petty tyrants, whose only function — and passion — is to troll the Internet searching for upsetting dissent, and then agitate for its removal by centers of corporate powers: NBC News’ disinformation unit employees Ben Collins and Brandy Zadrozny; The Washington Post’s ‘online culture’ columnist Taylor Lorenz; and the New York Times’ tech reporters (Mike Isaac, Ryan Mac and countless others). At the time I first reported on what they are assigned to do, I dubbed this ‘tattletale journalism’: the fixation with demanding the immediate cessation of ‘unfettered conversations’ and the constant attempt to confront and expose ordinary citizens for the crime of expressing prohibited views.”

In the strengthening censorship regime, these “journalists” are “tinkering with the infrastructure of the Internet to expel sites and people anathema to liberal pieties. As usual, not just liberals but also the left cheered this forced capitulation, as they are somehow convinced that the world will be a better place when the power to silence voices and ideas is in the collective hands of the U.S. Security State, their oligarchical partners who own Big Tech, and their servants who masquerade as ‘journalists’ deep within the bowels of the West’s largest media corporations,” Greenwald wrote.