An Oklahoma City transgender resident said she was “disturbed” and felt threatened by a local restaurant’s sign proclaiming “we do not have a transgender bathroom … so don’t be caught in the wrong one”.

Paula Schonauer, who did not actually visit the Steak & Catfish Barn, nonetheless told a local NBC station “I was disturbed. It was really a let down.” 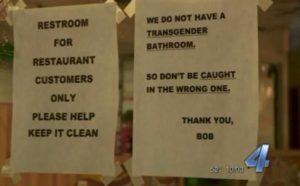 She said the sign is discriminatory and the last sentence scares her.

“That sign has an implied threat and a threat that’s very real to me,” Schonauer said.

Troy Stevenson, with the LGBTQ rights group Freedom Oklahoma, said: “You’ve got this sign implying a threat of potential violence against somebody for going to pee. That’s not the Oklahoma standard. That’s not what it means to be American. That’s just wrong.”

“We have a lot of redneck guys that come in here. Truck drivers and everything. They’re big husky guys and I said ‘man alive!’ If their wife or their little girl walked in that bathroom and a man followed them in there, I wouldn’t have a restaurant,” Warner said.

He said the sign is intended to protect his property and customers, including those who are transgender.

“I don’t want to see nobody hurt,” Warner said.

In a March 16 report, Zero Hedge noted that “when confronted by NBC on the issue, Bob simply implied he, like about 99 percent of the rest of the population, couldn’t care less about the bathroom politics consuming 75 percent of liberal D.C. politicians’ time these days and was just trying to prevent anyone from getting roughed up by the ‘redneck guys’ that frequent his fine establishment.”

Apparently those “redneck guys” don’t subscribe to “the notion that people get to casually choose their gender…that kind of backwards mentality is so six months ago,” Zero Hedge said, adding that “the real story here is that the sign had been posted at the restaurant for 10 full months without an issue before NBC was tipped off … which, hardly sounds like the national crisis that our politicians have made it out to be.”