The Homepage Editor for The New York Times was caught on hidden-camera admitting the Times’ was determined to influence the 2016 election with its reporting.

“I think one of the things that maybe journalists were thinking about is like…Oh, if we write about him, about how insanely crazy he is and how ludicrous his policies are, then maybe people will read it and be like, oh wow, we shouldn’t vote for him,” the editor, Des Shoe, told a Project Veritas undercover journalist. 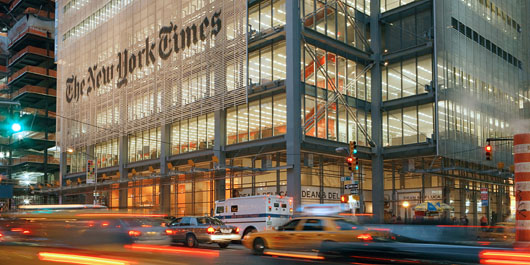 In part three of the Project Veritas “American Pravda” investigation of the Times, the editor also details her personal biases against President Donald Trump:

“I feel like Trump is…is just a…is sort of an idiot in a lot of ways. Just an oblivious idiot.”

“If you impeach him, then Pence becomes president, Mike Pence, who’s f—ing horrible…I think maybe, possibly worse than Trump. He’s extremely, extremely religious. He [Pence] at one point backed a bill that hinted at conversion therapy for gay people…Which is like electrocution, stuff like that.”

Shoe told the undercover journalist that reporting objectively is simply too difficult for the Times: “Our main stories are supposed to be objective. It’s very difficult in this day and age to do that.”

The New York Times senior homepage editor goes on to explain the positive effect of Trump’s victory: “Since the election, like you know…Speaking on, you know, for The New York Times, our subscriptions have sky-rocketed since…I mean, they call it the Trump bump.”

That sentiment was echoed by the Times’ Nick Dudich, who was featured in the first two parts of “American Pravda”. He explains, “I mean honestly, Trump has driven us more business than anybody else. Anytime he says failing, we add a boost of subscribers.”

The New York Times responded to part one of the investigation in a statement, calling Dudich “a recent hire in a junior position.” Later, Executive Editor of the NYT Dean Baquet described Dudich as “a kid…who just started his career in journalism.”

The same cannot be said for Shoe, a senior-level employee who has been with the paper since January of 2009.

Shoe claims that the New York Times has to chase clicks in the current media environment: “The Washington Post, people who have paywalls up…The main objective is to grab subscribers. You do that any way that you can.”

When told the New York Times seems more like a “click-paper,” Shoe replies:

“I mean, you’re not wrong. Like, I would love to be able to speak my mind completely about…If I ever leave the Times I’ll go back to you guys and tell you exactly what I think. But, I mean, there’s stuff like…And this is what I was trying to say is like the last couple years it’s changed for the bad.”