Rep. Devin Nunes has filed a lawsuit against The Washington Post for a “hit piece” the California Republican said amounted to defamation.

Nunes filed the lawsuit against the Post and intelligence reporter Shane Harris over a report related to a classified House Intelligence Committee briefing on alleged Russian interference U.S. elections, the Washington Examiner reported on March 2. 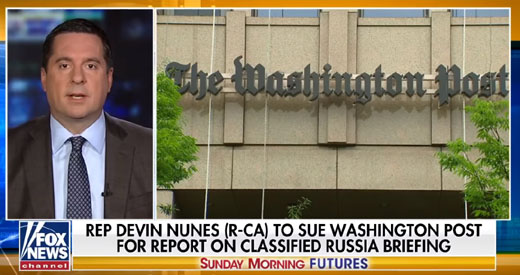 Nunes is seeking $250 million in damages.

“This action arises out of a WaPo hit piece that was manufactured out of whole cloth,” the Nunes lawsuit said. “Billionaire Jeff Bezos purchased WaPo in 2013 for the purpose of using WaPo’s mighty pen to influence Federal elections.”

It continued, “Bezos’ WaPo heavily promoted the Russian ‘collusion’ hoax between 2017 and 2019, in spite of the fact that there was no evidence that any member of the Trump campaign colluded with any ‘Russian’ to influence the 2016 Presidential Election. This is 2020. As this case illustrates, Bezos and his printing press remain desperate to defame the President of the United States and his allies in Congress. This defamation must end.”

The Washington Post “hit piece” was published on Feb. 20 and revolved around leaked details from a classified Feb. 13 briefing conducted in part by Shelby Pierson, the intelligence community election threats executive under then-acting Director of National Intelligence Joseph Maguire. Sources cited by The New York Times claimed Pierson warned, “Russia was interfering in the 2020 campaign to try to get President Trump re-elected.”

But a spokesperson for the Office of the Director of National Intelligence told the Washington Examiner, “Shelby did not say Russia is aiding the re-election of President Trump.”

The Washington Post wrote, “Maguire, a career official who is respected by the intelligence rank and file, was considered a leading candidate to be nominated to the post of DNI, White House aides had said” but that Trump’s opinion “shifted” when “he heard from a Republican ally about the official’s remarks.” The newspaper further claimed, “Trump learned about Pierson’s remarks from Rep. Devin Nunes (Calif.), the committee’s ranking Republican and a staunch Trump ally, said one person familiar with the matter.”

The paper cited a source who claimed the briefing “was the catalyst” that led Trump to replace Maguire with U.S. Ambassador to Germany Richard Grenell as acting director of national intelligence. But the New York Times cited two administration officials who said that “the timing was coincidental,” that “Mr. Grenell had been in discussions with the administration about taking on new roles,” and that “Mr. Trump had never felt a kinship with Mr. Maguire.”

The Washington Post wrote, “Trump erroneously believed that Pierson had given the assessment exclusively to Rep. Adam B. Schiff (D-Calif.), the chairman of the House Intelligence Committee, people familiar with the matter said.”

Nunes criticized the alleged “intentional misrepresentations” and said he pointed to “the truth.”

“Devin Nunes never told the President or anyone else that Shelby Pierson had given an exclusive briefing to Schiff. Devin Nunes, did not meet or speak with the President on February 13, 2020 — the day of the ‘classified hearing’ — or on February 14, 2020, and never conveyed to him any indication that Schiff was given an exclusive assessment of Russian actions,” Nunes lawyer Steven Biss wrote in the complaint filed on March 2.

The complaint also said, “Nunes did not say or do anything to ‘ruin’ Maguire’s chances of becoming the permanent intelligence chief.”

Nunes claimed that “the WaPo Hit Piece” imputed to him “criminal conduct” as well as “dishonesty, deceit, sharp, and unethical practices,” which he said “impugn” his “integrity” and “prejudice” him in the performance of his congressional duties.

The GOP congressman accused the Washington Post and Harris of “acting in concert with House Democrats” and attacked Harris as a “well-known puppet of the FBI and CIA.” Nunes cited as proof the fact that the reporter incorrectly claimed in January 2018 that British ex-spy Christopher Steele’s dossier “was not used as the basis for a FISA warrant on Carter Page.” Nunes claimed the article in question was a “reprisal” for the findings of the DOJ watchdog report on Foreign Intelligence Surveillance Act abuse, which “exposed” the Washington Post and Harris as “liars.”

Kris Coratti Kelly, the Washington Post’s vice president of communications, defended the paper and its reporters.

“The Post stands behind the reporting of Shane Harris and his colleagues,” Kelly said in a statement to the Washington Examiner. “We will vigorously defend our work against the claims made in Rep. Nunes’s lawsuit.”