Mark Levin’s “Unfreedom of the Press” is a book full of “bombast and bile” from a “right wing radio host” long considered “fringe,” according to a media review of the Amazon best seller.

The ad hominem-loaded attack was launched by none other than Annalisa Quinn for taxpayer-subsidized NPR. 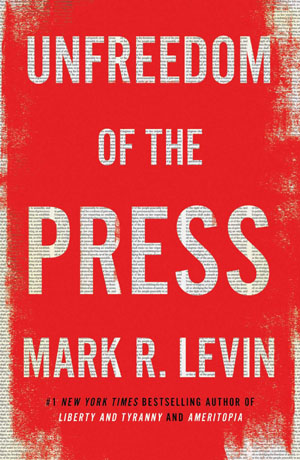 In the book, Levin writes, the media has become “a profession whose members form a class or aristocracy of strident, pretentious, arrogant, and self-righteously superior individuals, rarely capable of circumspection or improvement.”

In the review, Quinn writes Levin off as a “merchant of questionable goods” who “does not notice or chooses to ignore humor, irony, or nuance.”

President Donald Trump tweeted: “Word is out that book is GREAT!”

The success of the book right out of the starting gate (it debuted at No. 1 on Amazon) can, Quinn says, be attributed to “a few factors, including the presidential endorsement, the approach of Father’s Day, and Levin’s pre-publication rounds on the talk shows.”

Quinn concludes by saying that “ ‘Unfreedom of the Press’ is little more than a free gift with purchase. What people are actually buying is not a book but a message to the (New York) Times and the media at large. And the message, to use a favored Levin phrase, is ‘SCREW YOU.’ ”

Some observers noted that Quinn’s review itself serves as an unwitting advertisement for the book — and Father’s Day is right around the corner.

Meanwhile, the very press behavior that Levin chronicles in his new best seller was on full display when CBS News “joined CNN’s campaign of to encourage violence against the political right” by embracing the recent milkshake assaults on politicians, Breitbart News reported on May 22.

The hosts at CBS This Morning were absolutely giddy about the assault on Farage.

Co-host Tony Dokoupil began by saying: “In the latest of a series of attacks on right-wing politicians, Brexit Party Leader Nigel Farage was doused with a milkshake yesterday. That was actually salted caramel if anyone is wondering.”

This prompted laughter from Dokoupil’s co-hosts. Continuing the jovial discussion of political violence, he added, “I’m sure it feels great. I’m sure people love the feeling. Pictures fly around the world.”

Breitbart’s James Delingpole said there is nothing funny or harmless about these assaults.

“Once you start suggesting that physical assaults of any kind are acceptable then you are legitimizing violence. And violence has a nasty habit of escalating,” Delingpole wrote.

Breitbart’s John Nolte noted that “So far there have been more than 330 documented hate crimes against Trump supporters. CNN and CBS consider that only a good start.”