November election will determine if ‘we have a civilization or not,’ ex-NSC member says 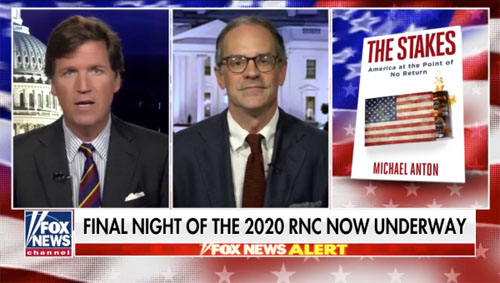 The 2020 election will determine whether “we have civilization or not,” Michael Anton, author of “The Stakes: America at the Point of No Return” said on the Thursday broadcast of “Tucker Carlson Tonight”.

Anton pushed back on claims by Democrats and their major media allies that rioting in Portland, Kenosha, New York and Chicago are characteristic of “Trump’s America,” arguing that the federal government can only do so much about local governance under the Constitution.

“But … if we have a Democratic administration that thinks exactly like these Democratic mayors and governors, I’m afraid the country will plunge further into chaos that will make the last three months look relatively mild,” Anton warned.

Anton, who was Deputy National Security Advisor for Strategic Communications and Speechwriting from 2017–2018, suggested there “are different elements of the coalition” responsible for the mayhem which is devastating cities nationwide.

“Some of them really do just hate the civilization, they feel like it hasn’t been right for them, hasn’t done justice by them. It’ll never work for them. They want to tear it down,” Anton said.

“Some of the rhetoric that you hear out of Antifa and other rioters doesn’t suggest a positive goal at all. They’re nihilists that want to burn our country down. The first duty of government is to protect law and order, protect lives, protect property.”

Anton said he has “never seen anything like the last three months. America continues to burn and it seems like everyone in power, except the president and his closest allies, wants to let it happen, thinks it’s a great thing, or just can’t find the will to stop it.”