The board voted 7 to 2, with two abstentions, to change the name. The school, located in Falls Church, was named after the Confederate general when it opened in 1958. 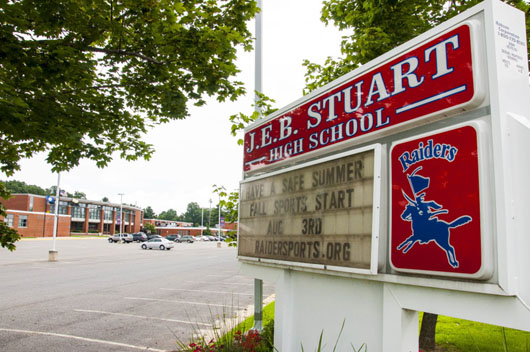 Critics of the vote said the board caved to the demands of Hollywood activists over the wishes of the school’s own students, 90 percent of whom did not want the name changed.

J.E.B. Stuart High has “over 100,000 graduates, the highest diversity rate in Fairfax, and zero reported race-related incidents in decades,” the Fairfax Free Citizen website noted in a July 30 post. Yet, “7 hardcore cultural Marxists and 2 gutless abstainers all voted to change the name.”

An online petition to change the school’s name, which received 35,000 signatures, was started by Oscar winners Bruce Cohen and Julianne Moore – who met at J.E.B. Stuart in the 1970s.

Fairfax Free Citizen noted that one of the speakers at the school board meeting who opposed the name change was an African American graduate of the school.

The graduate, a U.S. Army officer named Nick, told the board that he was “Proud to have gone to J.E.B. Stuart,” and he never saw or felt any racial discrimination while at the school which is comprised of 75 percent minorities from 80 different countries.

“He also stated he specialized in history and told the school board he had no problems with the Confederate Officer J.E.B. Stuart, and suggested others study him and the Civil War more, as well as the state of Virginia (which he is also proud of). He next said they only thing he finds offensive is people telling him what to be offended of, and that he is nobody’s victim.”

Fairfax Free Citizen noted that “What was then hilarious to find is that the opposition had seven speakers that had committed themselves to written scripts about how African Americans are oppressed at J.E.B. Stuart, and all of them were WHITE (telling people of color how to react to old historic names).”

The “historic irony” of the school board’s action, Fairfax Free Citizen said, “is that J.E.B. Stuart was killed in action towards the end of the Civil War by his classmate at West Point (Gen. Phil Sheridan); history now repeats itself 150 years later as a handful of classmates killed the good 60-year history and heritage of 100,000 proud graduates of J.E.B. Stuart High School.”

The board did not take any action to rename a number of other schools in the county also named for prominent Confederates, including Robert E. Lee High, Lanier Middle and Sangster Elementary.