North Korea will dismantle its nuclear test site at Punggye-ri between May 23 and 25, North Korean state-run media reported. 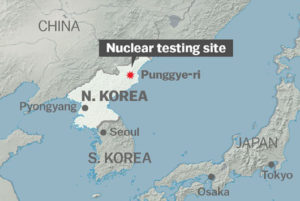 In the early weeks following news reports in the West that North Korean dictator Kim Jong-Un had agreed to denuclearization and would hold direct talks with U.S. President Donald Trump, the official media in Pyongyang was silent on the historic development.

Rodong Sinmun, the North’s main newspaper, carried the full text of a statement North Korea’s Foreign Ministry had released on May 12 saying the nuclear site would be demolished.

The Korean Central Broadcasting Station, a radio station for the domestic audience, also reported on the ministry’s announcement.

The Korean Central Television Station also showed a newscaster reading the statement on May 12.

“These reports appear to be designed to show not only to the international community but also to the people at home that the regime in Pyongyang is serious about its denuclearization commitment,” Yonhap said in a May 13 report.

The North’s state media outlets also carried reports on U.S. Secretary of State Mike Pompeo’s visit to Pyongyang and his meeting with Kim Jong-Un, saying the two sides had in-depth discussions on issues related to the upcoming summit between Kim and U.S. President Donald Trump.

Trump and Kim are scheduled to hold a summit in Singapore on June 12.

“Ahead of the summit with the U.S., the North appears to be trying to promote its credibility through actively letting not only the international community but also North Korean people know of the plan to dismantle the nuclear test site,” said Kim Yong-hyu, a professor at Seoul’s Dongguk University.