The principal of a North Carolina high school confiscated all senior yearbooks after a white student used President Donald Trump’s “build that wall” rallying cry as her quote.

Critics decried the yearbook quote as “racist” after a screenshot of the Richmond Early College High School student’s photograph with the quote appeared on social media. 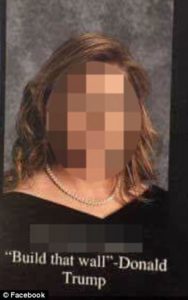 The predominantly white public school (60 percent) is in Hamlet, North Carolina and has 214 students.

In a statement, Richmond County Schools said there were “errors” in the yearbooks which had been put together by students.

“Earlier this week, it was discovered by school administration that Richmond Early College yearbooks had errors and inappropriate comments,” a statement from Richmond County Schools said. “The principal immediately collected the distributed yearbooks.

“We regret that this incident has occurred and are currently working with the yearbook’s publisher to make corrections. As a district, we do not and will not tolerate inappropriate conduct toward any of our students.”

The 22 yearbooks which had already been distributed among students have been confiscated and are being reprinted, the school district said.

Some welcomed the confiscation of the books, claiming the quote is offensive to the school’s Hispanic students.

“When one has a negative connotation to a huge majority of the school then it’s a problem,” said one female student.

Others accused the school of trying to censor the girl’s beliefs.

“When did the First Amendment become inappropriate? It’s pathetic that students approaching graduation are not mature enough to handle words on a page,” one critic said.

“It’s a cryin’ shame that a white person can’t even quote the President in their yearbook without being called racist.”

“Funny how a few years ago all you saw was ‘my president is black’. What is this world coming to!” another said.

The student did not face any disciplinary action and it is not known what her new yearbook quote will be.