North Carolina has filed an emergency brief with the Supreme Court to restore its voter ID law, saying it is too close to the November election for courts to nullify a system that was used in the state’s primary elections.

“North Carolina should not be forced to scramble mere months before the general election to rejigger settled election plans at the Fourth Circuit’s command,” the state said in a brief filed with Chief Justice John Roberts. 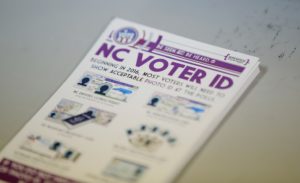 The North Carolina law was struck down last month by the U.S. Court of Appeals for the 4th Circuit, which ruled the law intentionally discriminates against African Americans. Roberts is designated to handle emergency requests from the circuit.

Roberts is likely to ask for a response from the Justice Department and the civil rights groups that filed the challenge to the law before referring the matter to the entire court.

Since the high court is split, with four conservatives and four liberals, analysts say North Carolina may have a hard time finding the necessary five votes to stay the lower court’s ruling.

The state said the ruling from the 4th Circuit was unprecedented and that “there is no reason to believe that [the law] will have any detrimental effect on voters, minority or otherwise.”

The 4th Circuit overturned a nearly 500-page decision from a district judge who had approved the law. The panel said Judge Thomas Schroeder’s comprehensive examination of the legislature’s action “seems to have missed the forest in carefully surveying the many trees. This failure of perspective led the court to ignore critical facts bearing on legislative intent, including the inextricable link between race and politics in North Carolina.”

North Carolina made some concessions in its petition to the Supreme Court. It asked the court to reinstate the state’s voter-ID law, its reduction of early-voting days from 17 to 10 and a provision that ends the state’s practice of pre-registering teenagers to vote, so they are enrolled when they turn 18.

It did not challenge the lower court’s ruling that restored same-day registration or allows some votes that are cast in the wrong precinct to be counted for top-of-the-ticket races.