A non-profit veteran’s group invited by the NFL to advertise in the official Super Bowl program later had the ad rejected. 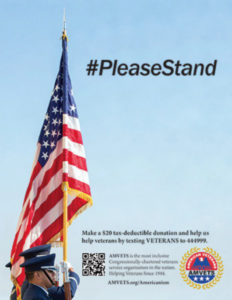 American Veterans (AMVETS), a group founded by World War II veterans, said the same print ad which encouraged people to “please stand” for the National Anthem was accepted for inclusion in both the NBA and NHL All-Star Game programs.

“AMVETS believes people should stand for the National Anthem,” John Hoellwarth, the national communications director for AMVETS, told The Daily Caller “We don’t insist that they must, and we don’t vilify them if they don’t. It’s their choice. But we’d like to politely ask them to ‘please’ choose standing, and that’s all this ad does.”

AMVETS was informed by H.O. Zimman, the publishing firm responsible for putting out the official Super Bowl program, that the ad had been rejected.

NFL Vice President of Communications Brian McCarthy told The Daily Caller that while a third party is responsible for selling ad space in the program, the NFL ultimately decides what content is allowed to run.

“The Super Bowl game program is designed for fans to commemorate and celebrate the game, players, teams and the Super Bowl,” McCarthy said. “It’s never been a place for advertising that could be considered by some as a political statement.”

McCarty added that “AMVets (sic) submitted an ad last Wednesday with the line ‘Please Stand’ (no hashtag). We looked to work with the organization and asked it to consider other options such as ‘Please Honor our Veterans.’ They chose not to and we asked it to consider using ‘Please Stand for Our Veterans.’ Production was delayed as we awaited an answer. As the program was going to production, the organization asked about including a hashtag and was informed that approval would not be provided in time and was asked to approve the ad without the hashtag. The organization did not respond and the program ultimately went into production to meet deadlines.”

The Daily Caller, however, reported that “It should be noted that the version of AMVETS’ ad” that was supplied to The Daily Caller “did in fact contain a hashtag, which appears to run contrary to McCarthy’s statement.”

AMVETS was given the chance to submit a new ad but did not accept the offer, The Daily Caller reported on Jan. 22.

“The NFL’s decision to reject this very reasonable message from veterans is both surprising and very disappointing,” Hoellwarth said.