The newspaper owned by Jeff Bezos, the wealthiest human on the planet according to USA Today, is telling Americans to “lower expectations” and learn to live with less amid a supply chain crisis that has resulted in empty shelves in stores across the nation.

“Don’t rant about short-staffed stores and supply chain woes. Try to lower expectations,” read the headline of a Monday op-ed by The Washington Post’s Micheline Maynard. 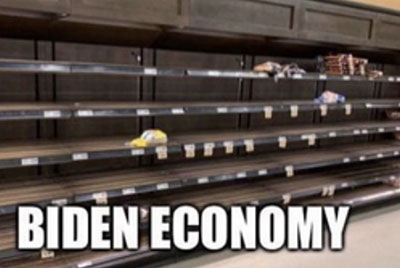 In her diatribe, Maynard mocked Americans for questioning devastating inflation and supply chain failures that have manifested during the first nine months of the Biden Administration.

“Rather than living constantly on the verge of throwing a fit, and risking taking it out on overwhelmed servers, struggling shop owners or late-arriving delivery people, we’d do ourselves a favor by consciously lowering expectations,” Maynard wrote.

Maynard proclaims that “Americans’ expectations for speedy service” should be replaced by more “realistic expectations.” She then goes on to quote an Atlantic article in which the writer asserts that American shoppers have been “trained to be nightmares.” The Atlantic is owned by Steve Jobs’ widow, Laurene Powell Jobs.

Breitbart’s Katherine Hamilton noted on Oct. 19 that Maynard was “following the typically accepted diction of far-left media” when she “notably credited the disembodied ‘pandemic’ for supply chain woes, rather than properly assigning blame to world governments that shut down economies and caused mass unemployment and disruptions in a largely failed effort to ‘stop the spread.’ ”

Hamilton noted: “Unlike the leftist elites, who can breezily drive their Teslas to the nearest Whole Foods for their vegan, dairy-free, gluten-free, leather-free, cruelty-free goods, supply chain problems and resulting inflation are a tax on everyday Americans. These same Americans, not necessarily plagued by an inability to frivolously shop, are instead troubled by finding toilet paper, filling their cars with gas to get to work, and paying for increasingly costly staples like meat and eggs.”

National Review senior political correspondent Jim Geraghty noted on Oct. 19: “We built our economy on international supply chains and rapid transport of goods from the source to the manufacturers to the consumers. This system got goods where they needed to arrive for decades. Everything in this process was working fine before the pandemic. The pandemic is largely behind us. So why are there now 200,000 shipping containers gridlocked off the coast of Los Angeles? How did we go from a well-oiled machine to so many goods being delayed and in short supply in so many places so quickly?”

Maynard’s column concludes: “American consumers might have been spoiled, but generations of them have also dealt with shortages of some kind — gasoline in the 1970s, food rationing in the 1940s, housing in the 1920s when cities such as Detroit were booming. Now it’s our turn to make adjustments.”

Food rationing in the 1940s? Does World War II ring a bell?

Still, Geraghty noted, “credit goes to Maynard for coming up with a thoroughly fitting message for the party in power, as they approach the midterms: Democrats in 2022: Try to Lower Your Expectations!”