Here’s some news that New York officials aren’t too happy about spreadin’.

Thousands of people no longer want to be a part of it. They’re leaving the Empire State in droves. 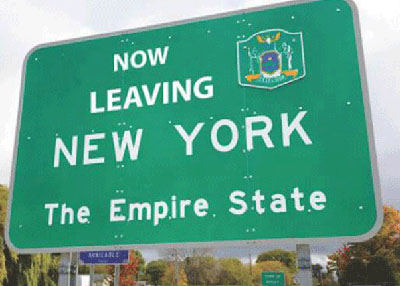 Data released by the Census Bureau on Tuesday shows New York’s population continued to decline more than any state in the nation. The population dropped by 126,355 people between July 2019 and July 2020, to 19.3 million. It is a decline of 0.65 percent, the most of any state by total and by percentage.

Due to the population loss, New York will almost certainly lose one seat in the U.S. House of Representatives and could lose two. New York currently has 27 House seats.

According to Census Bureau data, only Illinois came close to New York in percent of population decline, down 79,487 people, or 0.63 percent since last year.

Florida, which surpassed New York in 2014 as the third largest state in the nation, has widened the gap. The Sunshine State gained 241,256 people since July 2019, bringing its population to 21.7 million. Only Texas, the second most populous state behind California, gained more people over the past year, the census data showed.

New York has had an exodus over the past decade of about 1.4 million people, and about 21 percent of them went to Florida, by far the most of any other state, data last year showed.

More than 300,000 New York City residents have bailed from the Big Apple since March, the New York Post reported.

City residents filed 295,103 change of address requests from March 1 through Oct. 31, according to data The Post obtained from the U.S. Postal Service under a Freedom of Information Act request.

“Since the data details only when 11 or more forwarding requests were made to a particular county outside NYC, the number of moves is actually higher. And a single address change could represent an entire household, which means far more than 300,000 New Yorkers fled the five boroughs,” The Post noted.

The escape from New York is fueled not only by coronavirus concerns but economic worries, school chaos and rising crime, analysts say.

Michael Hendrix, director of state and local policy at the Manhattan Institute, said: “I think people are afraid. They’re afraid of catching a deadly virus and they’re afraid of crime and other quality-of-life concerns. One thing we also hear is about trash and cleanliness of the city.”

New York City Mayor Bill de Blasio said he was “not going to beg people to stay. I know this city will rebound. I know it and I know others will come. It is a passing moment. There will be a vaccine and then all the strength of New York City will reassert again.”

The mayor’s comments come as the city faces a $9 billion deficit, a deficit that will lead to massive job cuts for city workers if the city does not receive assistance from the state.