Power-mad Democrats are willing to go to great lengths to protect their feeble man in the White House, critics say.

That was evident on Aug. 31 when Democrat House Speaker Nancy Pelosi blocked Republicans from reading on the House floor the names of the 13 U.S. military personnel who were killed in Team Biden’s botched withdrawal from Afghanistan.

Republicans say Pelosi’s refusal was an obvious attempt to save Joe Biden from further humiliation over the Afghanistan disaster. Several family members of the fallen service members have personally blamed Biden for their loved ones’ deaths.

Florida Republican Rep. Brian Mast, who was wounded in combat in Afghanistan, told The Floridian: “We gaveled in, had a prayer, said the Pledge of Allegiance, took a moment of silence with pretty much all Republican veterans, then asked to be recognized to read names and bring up Afghanistan legislation. They did not acknowledge us, and just closed the House down.”

“How badly do Nancy Pelosi and the House Democrats want to cover up this Afghanistan debacle? They just blocked Members of Congress from reading the names of the service members who sacrificed their lives in Afghanistan last week,” said Florida Republican Rep. Carlos Gimenez. “Don’t you think our military deserves better?”

Joe Biden has come under fire for not properly honoring the fallen.

Gold Star families have “slammed Biden for allegedly blowing them off, speaking of his own grief and not listening to theirs, and appearing to check his watch while he attended the dignified transfer of 13 U.S. troops killed by ISIS terror attacks in Afghanistan,” The Daily Wire’s Amanda Prestigiacomo noted on Sept. 1.

Facebook reportedly disabled the Instagram account of Gold Star mom Shana Chappell, mother of U.S. marine Kareem Nikoui, 20, who was killed in the recent Kabul attack, after she blasted Biden. 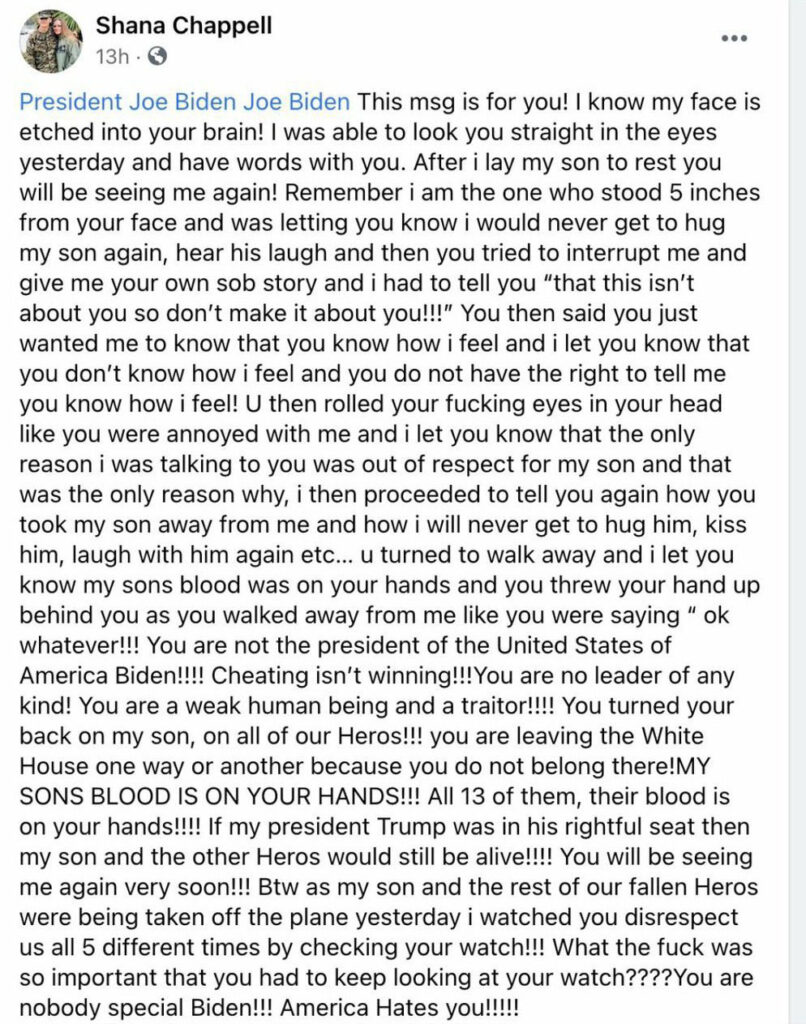