Investigators have uncovered evidence of voter fraud in Pennsylvania and Indiana.

In Pennsylvania, at least 86 non-citizens have been registered voters in Philadelphia since 2013, and 40 of those voted in at least one recent election, according to Joseph Vanderhulst, an attorney with the Public Interest Legal Foundation. 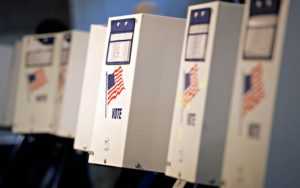 According to Vanderhulst, 59 of the ineligible voters were Democrats, six were Republicans, and 21 were members of minor parties or unaffiliated.

In Indiana, State Police searched a voter registration agency in Indianapolis as part of a voter fraud investigation that spans nine counties, the Indianapolis Star reported on Oct. 4.

“We wouldn’t still be investigating if we weren’t still finding issues that are indicative of fraudulent acts,” State Police Capt. David Bursten said.

President Barack Obama received a huge boost from Indianapolis in 2008 when he won the state by less than 1 point, the first time a Democrat carried Indiana since 1964.

In Philadelphia, the Public Interest Legal Foundation said “there is no way to know how many non-citizens might be registered to vote in Philadelphia, let alone in the rest of politically crucial Pennsylvania.”

Research by the law firm indicated that Philadelphia “makes no effort to proactively remove non-citizens or incarcerated felons, who also are ineligible to vote under Pennsylvania law.”

“If the checked [citizenship] boxes are blank, they still register them,” Vanderhulst said. “That’s how these people are getting on the rolls … It’s just too easy. Maybe it’s supposed to be easy — but the price of that seems to be no discretion on the front end.”

“My gut [feeling] on it is the culprit here is motor-voter [policies],” he said.

In the rare instances in which people are found to have illegally voted, prosecutions are rare.  Vanderhulst said he is not aware of a single instance in which Philadelphia elections officials referred a case for prosecution.

In Indiana, the voter fraud investigation began in late August when police learned of the filing of fraudulent voter registration forms in Marion and Hendricks counties, the Indianapolis Star reported.

The investigation has expanded from Marion and Hendricks counties to include Allen, Delaware, Hamilton, Hancock, Johnson, Lake and Madison counties, according to State Police, who said the possible fraudulent information is a combination of fake names, addresses and dates of birth with real information.

On Oct. 4, State Police detectives served a search warrant for the business offices of the Indiana Voter Registration Project (IVRP) in the 2400 block of North Meridian Street.

“An investigation of this nature is complex, time consuming and is expected to continue for several more weeks or months,” said a State Police statement. “Victims of the activities by some agents of the Indiana Voter Registration Project may not discover they have been disenfranchised from voting until they go to vote and realize their voting information has been altered. Such action may result in the citizen having to cast a provisional ballot.”

In light of the investigation, police are urging voters in the state to visit indianavoters.in.gov to confirm that they are properly registered.