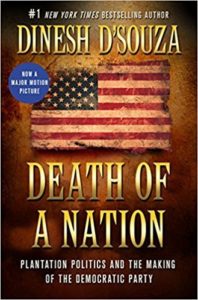 Following the film’s success, President Barack Obama responded by calling it “a deliberate distortion” of his “record and world view.”

In his new book, “Death of a Nation”, D’Souza writes: “If you strike at the Empire, won’t the Empire strike back? I was obviously the dumbest criminal in America”.

In 2012, D’Souza was indicted for using a “straw donor,” a person who makes illegal contributions to a campaign in the names of others, to make a donation. He was sentenced to five years probation, eight months in a “community confinement center,” weekly counseling sessions and given a $30,000 fine.

In “Death of a Nation”, which is also being made into a movie, both out next month, D’Souza writes: “Obama didn’t just despise me; he despised people like me. I was a non-white immigrant born in the same year as Obama, an Ivy League graduate as he was, an American success story just like him, and yet I saw America very differently than he did.”

D’Souza also notes that Obama did little to help African Americans and instead became a “recruiter” to expand the Democratic Party’s “plantation” of voters.

“Clearly blacks are a group that the Democrats now take for granted. Even America’s first African-American president didn’t feel the need to address their plight, other than to keep the benefits flowing to ensure their total dependency on the Democratic Party,” he writes.