A new book details how President Barack Obama used the power of the executive office to enable his friends to become quite wealthy. 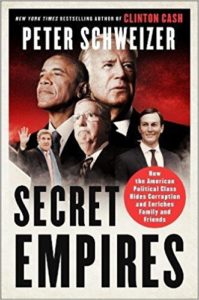 In his book, “Secret Empires: How Our Politicians Hide Corruption and Enrich Their Families and Friends”, Peter Schweizer notes that Obama and his team would “deem industries either destructive to the environment or exploitative for the financial and professional gain of his friends, including industries such as coal mining, offshore drilling, cash advance companies, and for-profit colleges.”

Obama went after those industries to lower the value of certain companies, which allowed his friends in the private sector to buy them up at drastically reduced prices, according to Schweizer, who also authored “Clinton Cash”.

Among those featured in the book were Marty Nesbitt and Harreld Kirkpatrick III, both former basketball players and close friends of the Obamas. Nesbitt and Kirkpatrick had formed a private equity investment firm, Vistria, in sync with Obama’s re-election in 2012.

Unlike other investment funds that avoid highly regulated industries, Vistria was specifically focused on the fields that Obama was busy regulating.

“A curious pattern began to emerge,” Schweizer said in his book. “Obama and his administration would attack industries with government power, which led to substantially lower valuations for these companies. Nesbitt and Vistria, or others close to Obama, could then acquire those assets for pennies on the dollar.”

For-profit higher education companies were a major target of the scheme, Schweizer noted.

Obama had said in 2013 that for-profit schools such as University of Phoenix, ITT Technical Institute, and DeVry University victimized students.

The University of Phoenix was hit particularly hard, Schweizer noted, as it was suspended in 2015 following an investigation by the Federal Trade Commission. The university’s parent company, Apollo Education Group, was bought out by three companies in 2016, including Vistria, for nine times less than its value before the suspension.