The corporate media has “weaponized fake news to the benefit of the Left, the globalists, and the multi-national corporations that control so much of our lives,” Breitbart News Editor-in-Chief Alex Marlow notes in his new book “Breaking the News: Exposing the Establishment Media’s Hidden Deals and Secret Corruption“. 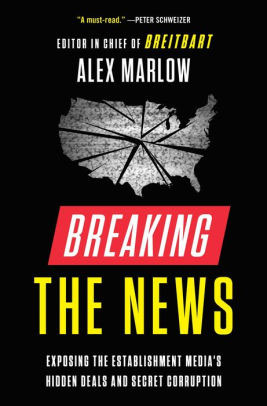 Over the course of a year, Marlow said he conducted “deep-dive research to unearth the stories the Establishment Media doesn’t want Americans to know,” Marlow said. “That’s why the book contains 1,206 endnotes totaling over 100 pages of source materials.”

“I didn’t want to write just a memoir — and there’s a small amount of memoir in this — but for the vast majority of it is new information based off of deep dive research into our corporate media establishment,” Marlow said.

“The American media corporation is trying to stamp out the American individual — that concept of freedom, the rugged individualist — and trying to make us all corporate cogs who identify more with companies than with countries or ourselves,” he added. “How much worse would the world be if we lost that concept of individuality? That is the design of our American media class right now, and I think I prove it in the book, and that includes subservience to China.”

“Breaking the News” exposes how the corporate media and U.S. ideological Left work hand-in-hand to advance the radical Left’s agenda, promote fake news, and bury stories inconvenient to their narratives.

Throughout the White House tenure of President Donald Trump, the establishment media largely exposed its own biases in inconceivable ways, prompting both Trump and Breitbart News to begin “banging the drum about ‘fake news’ ” — a narrative that resonated with millions of Americans, Marlow notes.