Fox News senior meteorologist Janice Dean, whose parents-in-law died of coronavirus in a New York nursing home weeks apart in the spring, wonders how Gov. Andrew Cuomo can “sleep at night” after the governor continues to deny blame for thousands of covid deaths in nursing homes and claim that his response to the outbreak “saved lives.”

Cuomo on March 25 ordered nursing homes to take in patients who had the virus. His order was not rescinded until May. 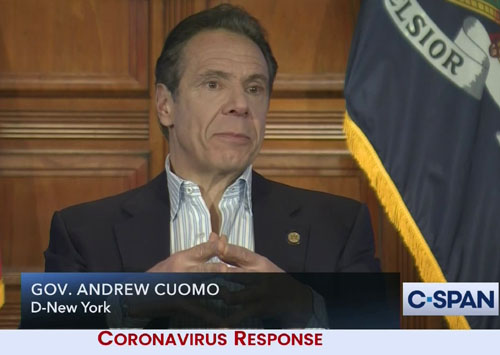 Cuomo is the son of the late Gov. Mario Cuomo of New York and the brother of CNN news personality Chris Cuomo. As the heir of a New York Democratic Party dynasty, he has faced no media or political pressure for his actions.

However, when asked by a radio host this week about families who blame his order for their loved ones’ deaths, Cuomo said: “That’s just incorrect, untrue and frankly it’s mean. That situation never came to be in New York state, because we flattened the curve so effectively, we always had available hospital beds.”

Cuomo added: “And we never needed nursing home beds, because we always had hospital beds. So it just never happened in New York where we needed to say to a nursing home, ‘We need you to take this person even though they’re covid-positive.’ It never happened.”

The New York Post Editorial Board said of Cuomo’s comments: “What bull. When the order went out, no one knew how bad things might get. Just as New York never wound up needing the thousands of ventilators it demanded (and got), hospitals never needed as many beds as they’d feared.”

The Cuomo administration in a July report admitted that more than 6,300 recovering coronavirus patients were sent to nursing homes.

The New York Post notes that 58 percent of New York’s nursing homes didn’t have a single case of the virus — in residents or staff — before the arrival of the covid-positive patients under Cuomo’s order.

“And the state still refuses to say how many died after getting infected in a care home. The full count, including deaths after transfer to a hospital, is likely twice the 6,600-plus who died in the homes,” the Post noted.

Dean wondered how Cuomo can “sleep at night” after his many denials of responsibility, adding that “many of us have not been sleeping well for 6 months since this policy was in place.”

“His health department has documented this and have released that over 6,000 COVID positive patients were placed in nursing homes as per his executive order,” Dean told Fox News host Shannon Bream. “So, the fact he is backtracking and he is erasing history, essentially erasing my husband’s parents and their deaths, that is what making our grief even worse.”

“I am asking lawmakers on both sides to join me to get answers not only for New York State but other states that have that same executive order in place to put covid-positive patients into nursing homes. Covid spread like wildfire and it killed thousands of our loved ones,” Dean said.

In a June interview with the Catholic news outlet Crux, Dean said:

“I think the governor bears a great deal of responsibility when it comes to the virus spreading like wildfire in the nursing homes. He sent out a mandate ordering these facilities to take covid recovering patients for several weeks before reversing the decision. I read one nursing home said that the state gave them body bags once that order went out. That is horrendous. Advocates for elder care were sending out emails to families saying this was going to be a potential disaster in the making.

“So, the nursing homes knew that this order would be a potentially deadly one. And now the governor is blaming everyone else that he can think of for his terrible policy never once admitting that his decisions were awful. He’s even blaming the nursing homes for following his own mandate.”